Everybody who's read any post of this blog knows I'm Southern. While we make some really incredible food down South, it's not known for its health benefits, and there are certain foods we just don't do. On the other hand, I've made my home here in Oregon now, and I've spent years developing a love for Pacific Northwest cuisine and yes, it does rival my love of Southern cooking. (I think it's about a tie.)

Yesterday involved both, as we made an impulsive morning decision to go to brunch at The Screen Door, a Portland institution I had somehow not tried yet despite its being the best Southern restaurant in town. Something I learned living in L.A. and Portland, and working in Seattle: The West Coast LOVES Southern food, which hilariously makes Southern restaurants some of the priciest in town. Southern food is almost exclusively built around the cheapest ingredients known to man, but in a city where you can buy sushi with the change you find in your sofa, going to a Southern restaurant is a special occasion type of deal. This is what happens when people don't cook.

Regardless of price and West Coast quirks, though, the food was fabulous. It was worth the long wait (half of Portland descends upon this restaurant on the weekends) and it was worth the price. Keith got a fabulous buttermilk biscuit with excellent fried chicken, drowned in sausage gravy with grits on the side. They have their own house-made hot sauce and it was terrific on those grits. I got a less-than-Southern brunch special - orange and ricotta griddle cakes with a Cointreau sauce and warm maple syrup drizzled over. We both had plenty left over for today. Next time we go, we'll split something, like the fried chicken over a sweet potato waffle; the people sitting next to us ordered that as we were leaving, and it was enough for four people.

Sidenote: I'm always really amused at the number of West Coasters who believe that Southerners eat fried chicken and waffles together. I never saw that combination until I visited Roscoe's House of Chicken and Waffles in Los Angeles. Inauthentic as it may be, however, it's a great combination and one I think Southerners should adopt post haste.

So anyway, it took us most of the day to digest that brunch and then in the evening I girded my loins for the biggest challenge my kitchen has seen in a long while...

I was getting ready to make SALMON.

For years I've felt like I was missing out. Everyone loves salmon but me. It's got incredible health benefits, it's said to be delicious, it goes with almost everything, and it's a staple of Pacific Northwest cuisine. And small wonder that it is, because our local wild-caught salmon is said to be the best in the world. You can even catch it yourself right here in the river this time of year without even leaving Portland!

So clearly, I needed to learn to like it, and for months I've been working up the nerve. The salmon I had as a kid was canned, oily, less-than-fresh. It had probably been grown in some dirty farm pond somewhere, then flown several hours to Memphis, where it sat on melting ice at Kroger for who-knows-how-long before one of us bought it to choke down for the health benefits. I knew I wasn't interested in that. But last October, at the farmers' market, I picked up a couple of fresh wild-caught filets from a pair of sisters who owned their own fishing boat, and I stuck those filets in the freezer until such time as I got ready to use them.

That time was last night. I searched the internet for a suitable recipe, and came up with this one. The salmon itself really stands alone in this recipe; it's just sprinkled with salt and pepper, seared skin-side down in a hot skillet and then flipped to finish off in a hot oven. But it's paired with a mix of veggies and lentils, stewed and then mounded into a bed for the fish. (I left out the onions and used regular brown lentils in mine, which do take a few minutes longer to cook but are considerably cheaper than green ones.) To go along with, I sauteed some kale and braised it with crushed red pepper and rice vinegar. 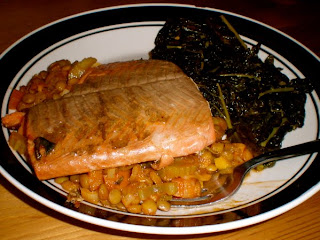 Let me tell you, it was FABULOUS. Beyond fabulous. I don't even have a word for it. I never knew fish could taste like that! And without even any butter, or sauce, or even lemon. I loved that salmon and cleaned my plate before I knew what happened. Keith enjoyed it too, and was glad to have me aboard the salmon bandwagon. Once again the lesson is driven home: Quality ingredients make all the difference, and don't need a fancy preparation to make them incredible!

Now that salmon season is gearing up again, I have a hunch we'll be eating a lot more of it around here.

But don't worry. I'll still be making biscuits and gravy too.
Posted by Kimberly at 9:32 AM