Faith vs. The State 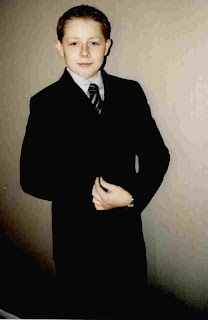 The front page of my local newspaper, The Oregonian, greeted me on the porch this morning with a screaming headline: Sentence is warning to church. I knew immediately what it was about, even without the large photo of police leading a middle-aged, heavyset couple through a crowded courtroom. Jeff and Marci Beagley are going to prison.

I've been following this case in the news for the past few months. The Beagleys belong to a religious sect called the Followers of Christ, which doesn't believe in modern medicine. In June of 2008, their 16-year-old son Neil (in the photo at age 14) died of kidney failure. Turns out he had a congenital urinary blockage that was only treated with prayer, which didn't work. His parents, Jeff and Marci, were charged with criminally negligent homicide for what is being called (inaccurately, in my opinion) a "faith-healing death."

In their defense, Jeff and Marci did ask Neil if he wanted to go to the doctor, and he refused. Of course, he'd been homeschooled within the church since third grade and had little to no contact with the sinful world, so he was likely far more afraid of hell than he was afraid of dying. And, while not a child, at 16 he was still a minor, taking some of the decision out of his hands. His death came only a couple of months after the death of his baby cousin Ava Worthington, who was Jeff and Marci's granddaughter and who also could likely have been saved by modern medicine. 2008 was not a good year for this family.

The Oregonian is pleased as punch with the guilty verdict, reporting today with palpable satisfaction the sentence that Jeff and Marci Beagley received yesterday: 16 months in prison, plus three years of post-prison supervision. This sentence is intended to be a strong message to the Followers of Christ that they should "soften" their stance on medical treatment - in other words, get in line with the mainstream and fall in with modern medicine.

It's hard to argue with that at face value. Neil and Ava are not the first children to die in their faith community. It's easy to think, "Well, yeah, these kids would be alive today if their parents had taken them to the doctor, so of course they're criminally negligent." It becomes a bit more difficult to agree with 16 months of hard time when you see the grief and early age etched deep in the lines around the Beagleys' eyes. It becomes really hard, however, to agree with this sentence when you consider the long-term implications.

First Amendment religious freedom issues aside, do parents have a right to set the limits on their children's medical care? This is a serious issue raised by this verdict, and one I haven't seen the local media discussing. We're a fairly liberal (and libertarian) West Coast state, so we tend to go along with crunchy hippie values, and we tolerate the more conservative values more than they would in, say, Seattle or San Francisco. Oregon was founded by refugees from the mainstream and we take a certain measure of pride in that. I do worry, however, that this ruling has set a dangerous precedent. Fundamentalist Christians aren't our mainstream, but what happens when we hold the hippies to the same standard we just set?

Take the current controversy over vaccination. I'm not completely anti-vax, but I don't think it's a coincidence that so many children suffer symptoms of heavy metal poisoning and autistic behavior soon after they're injected with massive cocktail doses of barely-tested shots. No, I don't want to see kids die from the measles, but I don't want to see them brain damaged from a chicken pox vaccine when most kids get through the chicken pox just fine on their own. Other people disagree with me on both sides. I know a lot of people who believe in vaccination as the savior of mankind, and I know people who would sooner inject themselves with formaldehyde than inject their babies with an MMR. For the time being, we as a society have agreed that parents have the right to make those decisions as they see fit; even though vaccinations are technically required for schoolchildren (11 required vaccinations in Oregon), we concede to "religious exemption," which is as often as not invoked by atheists and agnostics for reasons having little to do with faith.

Or take homebirth, which is very big in Oregon and which I myself hope to someday take part in. Our state's health plan for the low-income uninsured covers homebirth and midwife care, putting us at the forefront of a movement that gains more momentum every day. Every unnecessary C-section, every contribution to the USA's rising maternal mortality rate (largely due to hospital-acquired infections), every torn woman with scars from "purple pushing" flat on her back turns more women away from the medicalized birth experience. Currently we respect a wide range of birth options, from unassisted homebirth to scheduled C-sections, with birthing centers and licensed midwives in between.

Or hell, take diet. The USDA makes no secret of its disdain for raw milk, home canning, private animal slaughter on family farms, or traditional growing methods. They do, however, tolerate them and I have just as much right to give raw milk to my (hypothetical) children as my neighbors have to feed their children McDonald's. But for how long?

You see where I'm going with this? Big Pharm is getting bigger by the day, and look at the "health" bill currently in Congress if you deny the power of insurance companies and the medical establishment. Once healthcare becomes taxpayer-funded, that brings the government in further, and we know who they work for. (Hint: It isn't the taxpayer.) Will those parents who refuse full-scale vaccinations, those parents who birth at home, those parents who put up cranberry chutney, be put on trial if something goes wrong? It is a sad fact of life that sometimes children die, whether or not the medical establishment gets involved. Isn't that tragic enough without prosecuting the parents for decisions they made, for better or worse, with their children's well-being in mind?

I'd hazard a guess that the same judge who sent Jeff and Marci Beagley to prison for their son's death would not imprison the doctor if Neil Beagley died of an infection he got in the hospital during surgery to treat his urinary blockage. While modern medicine has done much to improve our longevity and quality of life, we run a very real risk of becoming slaves to a corporate-funded establishment. Even the doctors themselves are not in full agreement on everything; new information changes the rules every day. So should parents be allowed to use that information themselves, without input from the (human, fallible) experts? Should they be allowed to opt out altogether? Or should we further elevate the medical profession above the near-godlike position it currently holds, giving it even more authority over society's children than the parents have themselves?

It is my deepest wish for Jeff and Marci Beagley to find peace in their hearts for the choices they made, even though I myself do not agree with them. And I also hope these larger issues are raised upon appeal. This isn't about a fundamentalist sect in rural Oregon, this is about all of us - especially we who pride ourselves on our independent streak.
Posted by Kimberly at 8:32 AM