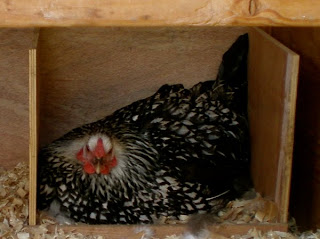 It happened a bit sooner than we expected, but here we are with a broody hen!

For several days now, our Lana Turner has given up on everything but her determination to be a mother. (I know how she feels; I've been suffering from a dose of that myself lately.) She won't leave the nesting box at all anymore, and she even moved the fake egg out of one box into the other so that she could set on both fake eggs. To make matters worse, we're not getting eggs anymore from our other hens, which leads us to believe that Lana is adopting their eggs as her own and setting on them as well.

Keith's tried tipping her out of the box to make her go eat and drink a little water, but she goes right back in the nest as soon as she can. She's our youngest hen, not even a year old yet, and already she's ready for motherhood! (And yes, this is the very same juvenile delinquent hen who led us on an adventure back in August.)

There are a few things you can do for a broody hen, but the best solution is to let her get it out of her system. I wanted an Australorp hen to add to the flock anyway - they have beautiful black plumage that shimmers green in the sunlight, and they lay lots and lots of gorgeous dark chocolate-colored eggs - so we found a lady about a half hour away who has a breeding pair of Australorps. She agreed this morning to save us up some eggs, and when she has six fertile ones we'll drive out and pick them up at a cost of fifty cents each.

Then, under cover of night while Lana sleeps, we'll carefully slip out the dud eggs she's currently setting on and we'll slip those fertile eggs underneath her. Less than three weeks later, hopefully we'll have a few chicks! We're getting six eggs because they don't all tend to hatch; apparently we'll be lucky to get a 50% hatch rate, and all the chicks might not make it to adulthood if they do hatch. When the babies grow up, we'll give them away or sell them, keeping one little Australorp girl if we get one.

So Lana, through her persistence and dedication, will get to be a mother! And maybe soon a bit of her luck will rub off on me.
Posted by Kimberly at 11:01 AM