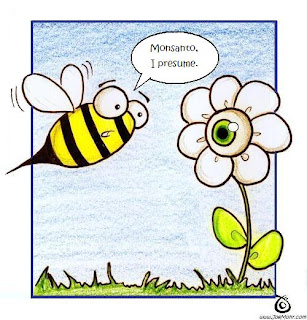 I'm getting ready to order a couple tons of seeds (not really, but it seems like it) and I wanted to make a point about it here for anyone else who might be getting a garden ready. Please, please, do NOT support Monsanto this season!

Monsanto is the very personification of the phrase "evil corporation." Information abounds online, starting with the Millions Against Monsanto campaign, if you aren't aware of the corporate terrorism, biological warfare, and genetic destruction they perpetrate worldwide. There's also the enlightening documentary, The World According to Monsanto, which you can watch online here.

But avoiding Monsanto isn't as easy as not purchasing Roundup. Most of the major pesticides, chemical fertilizers, and other non-organic gardening chemicals are made or sold by Monsanto. Even worse, so are seeds. The biggest seed retailer in this country, Burpee, gets their seeds from Seminis, which is owned by Monsanto. In fact, most large seed companies deal with Seminis, making it harder and harder for the average gardener to avoid dealing with the devil.

So if you're planting a garden this season, I implore you to get your seeds from non-Monsanto sources. It's worth the extra step; after all, we garden because we care about our world and surroundings, right? And do you really want to plant for a world in which vegetables are made with bug genes and small farmers are a thing of the past?

For good companies, I highly recommend the nonprofit Seed Savers' Exchange, which preserves endangered heirloom varieties. These old-school fruits and veggies have been bred for flavor and nutrition rather than grocery-store shelf life, and the Exchange's work in preserving the genetic diversity of our food supply could prove invaluable in the event that our corporate monoculture varieties should fail. I'm also a fan of Baker Creek Heirloom Seeds, and Seeds of Change.

On a smaller local level, there are sure to be smaller independents in your area if you look. My dad sent me several packs of seeds from Seedman for my birthday last year, including the tomatoes which are now germinating in my guest room. So hunt around! And remember, every dollar you don't spend on Monsanto is a dollar toward a brighter future.
Posted by Kimberly at 8:31 AM