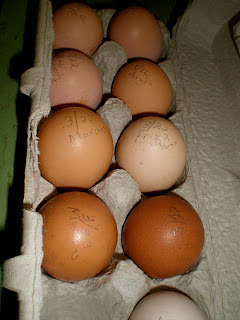 Nine fertilized eggs! For only $3. What a nice lady!

We drove out to the country east of town this morning to pick up our raw milk, then dropped it off at home and headed out for an hour in the opposite direction for fertilized eggs. It was a nice morning for driving out to the country; we woke up on our own just before dawn anyway, so we got a scone at His Bakery and began our day. There was a thick milky fog all morning, and it was chilly, but in that springtime early-morning way that lets you know it'll be beautiful later. Sure enough, it's now 12:30 and the sun is shining over a gorgeous day.

So we got our fertilized eggs for broody Lana to sit on - we got three Australorp eggs, four Cuckoo Marans (including one frizzle!), one half-Australorp and half-Blue Cochin, and one little bantam egg from a tiny mutt hen. When we got them home, I put on a heavy glove and slipped each one carefully underneath Lana, who was less than thrilled to have me reaching into her nest. She pecked and bit the glove, clucked and screeched with anger, but never moved from her nest. And now she's settling over those eggs and warming them up to grow baby chicks! 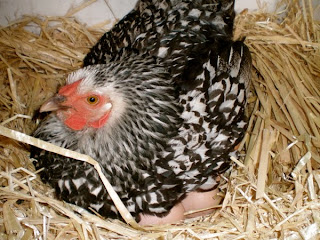 If all goes as it should, we expect the eggs to hatch over the weekend of April 9-11. We're planning a little jaunt to Ashland for the 11th, so hopefully the chicks come on the sooner side, but either way I'm confident Lana will handle them just fine. She's already such a protective mother! (And now she has nine real eggs and two fake ones to defend - quite the clutch for our Mama Hen.)

We also passed a nursery on the way home from the farm, and stopped because the sign bragged of Walla Walla onion starts. I can't resist - those sweet sweet onions are my absolute favorite in the summer, especially caramelized on the grill - so we got two big bunches of them and I'll plant them in the backyard later. 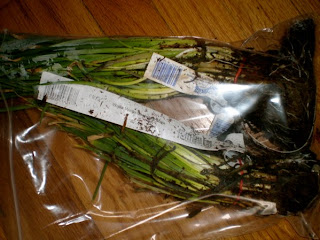 But I'm not planting them today! This afternoon we have our first BBQ of the season. A couple of Keith's work friends are dropping by before they leave for L.A. (they were in town shooting over the weekend) so we're dusting off the grill. Chicken with the cherry-chipotle BBQ sauce I put away in the freezer last summer, roasted veggie chips, salad with a salted lemon dressing, and homemade pickles from last summer too. For dessert, I'm making Jamie Oliver's rhubarb fool (it's stewed rhubarb layered with a vanilla-orange-honey sweetened yogurt and baked cinnamon puff pastry slices). And I'm juicing Meyer lemons for a honey-sweetened lavender lemonade. Photos and a rundown tomorrow, probably!
Posted by Kimberly at 12:21 PM