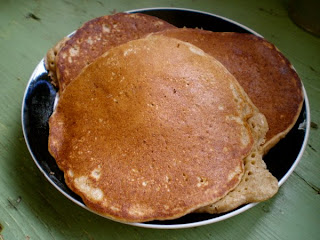 Well, after a week or two of attempts and tweaks, we've done it. We, my beloved husband and I, have mastered the gluten-free pancake!

This morning we made plain, vanilla, and apple-cinnamon to test out the recipe. I am stuffed. The apple-cinnamon pancakes in particular are a real stick-to-your-ribs kind, which you wouldn't expect from gluten-free. But they were so delicious that Keith was eating them straight out of the skillet without any butter or syrup, which he never does! So I'm really proud of myself for having finally nailed this recipe down. These pancakes rise beautifully in the pan and have that chewy, moist texture that pancake lovers dream about.

If you're waiting eagerly for the recipe, don't hold your breath, but you can still have some. I will soon be selling the premade mix (in a variety of flavors) to finance a food cart, on the way to my longtime dream of owning my own cafe. Next weekend we're having a pancake party to try out all the different flavors on a new audience, and shortly after that I hope to be in business!

In the meantime, it's a beautiful day outside, the sun is shining, and we have all the windows and screen doors open to let the fresh spring air in. The cats are basking in the sunlight, Chet Baker is playing on the stereo, the coffee is hot and fresh, and Keith and I are about to go indulge in our Sunday morning routine of doing the crossword together. After that I suppose we'll take a nice walk.

We'll need it to work off these pancakes.
Posted by Kimberly at 10:06 AM