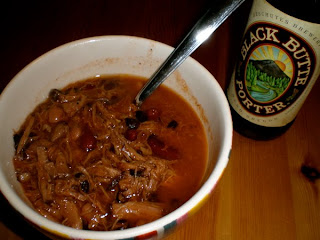 It's been a long hard week at work. So my husband, who is pretty much the awesomest human being who has ever lived, made me buffalo chili. I came home tired one night this week to a warm, snug house, a flickering fire in our pellet stove, and the most lucious aroma... he slow-cooked this buffalo brisket until it was spoon-tender, then did it up with beans and beer, and made the best chili I've ever had in my life. I curled up in front of the fire with a big bowl of that buffalo chili and my favorite Oregon brew, and for awhile I knew what my cats feel like when we pet them as they sleep in the sunshine after breakfast. It's just utter contentment.

So this morning I got the urge to bake and I made an apple pie. A gluten-free apple pie, which turned out to be WAY better than any other pie I've ever made. I could get going on this gluten-free thing, I think, if the bread were better. But this pie was the bomb diggity! 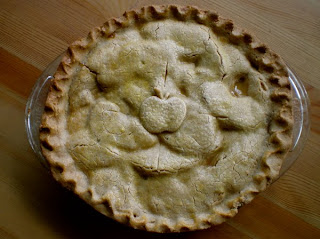 Just look at this flaky crust! 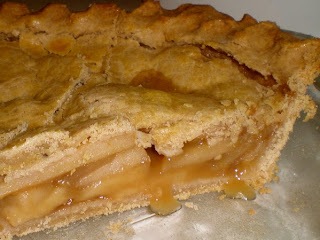 Anyway, Keith is sick, and convalescing in the bedroom today because tomorrow he leaves for L.A. again. I get a little mini-break out of it though! We're driving down to Ashland, our happyplace, and spending the day down there, seeing a show and whatnot. Then Sunday morning we're leaving VERY early (well before dawn) to head down into California, where Keith is dropping me off at the Amtrak station so I can ride back up to Portland. I'll have about 7 or 8 hours on the train to just enjoy the scenery and some relaxation. Ohh, bliss.
Posted by Kimberly at 5:12 PM