Yay, today I'm writing for TWO blogs! This is also a guest-post on my friend's urban foraging blog, First Ways. I follow her blog avidly even though I'm not much of a forager yet - I eat the dandelions out of my yard, but I still have no idea where to find burdock or watercress in Portland, even though I know they're growing wild around here. One day I will take her class and learn. In the meantime, I'm here to crow about my very first wild foraging expedition! 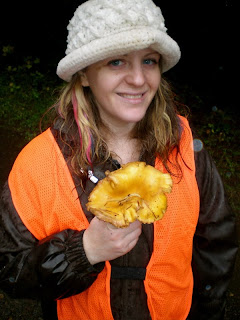 That's me there, yesterday morning just after dawn, soaked with heavy rain out in the woods, bagging up chanterelle mushrooms. They're going for a relatively cheap $10 a pound at the farmers' market nowadays - I've seen them for two or three times that - so it's worth a good hike to go pick them yourself if you know where to find them. I didn't, but we have a friend who does.

If you know any mushroom hunters, or if you've read Michael Pollan's book The Omnivore's Dilemma, then you know that mushroom hunters will go to any length to avoid telling anyone where their spots are. It can be incredibly frustrating for the novice mushroomer, to beg and plead for a lesson only to have someone politely change the subject. This time I got a promise back in the summer, when I first floated the idea of killing and eating our seven excess chicks; friends offered to take us mushroom hunting in exchange for chicken processing experience and two of the chickens.

So chanterelle season rolled around, time for us to collect on their promise. Everyone was busy with one thing or another, so it was only yesterday and quite late in the season when we all drove out to an undisclosed location in the woods (hey, I swore I wouldn't tell). We left well before dawn, and there was only just enough light to see through the hard drizzle when we parked the car. We set off with bags and buckets for a relatively easy hike, a few miles down a smooth trail, and then there was the first chanterelle - just sitting there, growing right next to the road.

As we went deeper into the woods, we found them everywhere! They seem to favor the places close to tree stumps and live trees, without too much undergrowth (other spots were carpeted in ferns, and there were no chanterelles there). We found most of them in the wetter spots - yes, even in the same forest, one spot can be considerably wetter than a spot just a few feet away - and they didn't hide underneath logs and such the way that some other mushrooms do. There'd be dark brown leaf litter and the yellow-orange mushroom standing bold against it.

I understood pretty soon why mushroomers guard their spots so jealously; the mushrooms make so little attempt to hide themselves that there would be none left for anyone if the word got out where they were.

By the end of the day, our experienced guide had scored just over ten pounds, and Keith and I had bagged about half that. Had it been earlier in the season, we would've gotten plenty more, but I'm thrilled with what we got! We had a wonderful time tromping around in the woods, and so far we're enjoying ourselves just as much eating these delicacies in our warm dry house. A couple of them even found their way into our scrambled eggs this morning.

But I spent the afternoon turning the bulk of them into duxelles. This is a lovely way to preserve mushrooms of any kind; the French use it to stuff meats and vegetables or to spread on omelettes, and the British use it for Beef Wellington. I now have a pint and a half of luxurious chanterelle duxelles, which I intend to stir into risottos and which will probably find its way into the cornbread stuffing and the gravy this Thanksgiving. (And now I'm all on fire to make a Beef Wellington too.)

Go get your own delicious mushrooms - chanterelles are the best but use whatever edible ones you have available - and make up a batch of duxelles. It'll give a rich boost of earthy flavor to almost anything. Here's my recipe, adapted from Well Preserved by Eugenia Bone.

Get down your biggest, heaviest skillet and heat 1 Tbsp olive oil in it. Add 1/3 the mushrooms and onions and saute; the mushrooms will let out a good deal of liquid, so keep cooking until the liquid evaporates. Transfer to a clean bowl, add another 1 Tbsp olive oil and half the remaining onion and mushrooms. Saute until the liquid evaporates, transfer to the bowl, then repeat with the remaining olive oil, onion, and mushrooms. When the last batch is cooked through, put the first two batches back in the skillet.

Add the whole sprig of thyme and all the other ingredients. Simmer, stirring occasionally, until the mushrooms have absorbed all the liquid; they should be a thick chunky paste by now. Fish out the thyme sprig and discard.

Spoon the duxelles into clean jars and refrigerate or freeze. You can also spoon it into ice cube trays and freeze into small servings, which can be added to gravy, pasta, eggs, etc. or just heated to thaw and spread on toast. If you want to save the duxelles in the fridge for more than a day or two, pack it densely into the jar with as few air pockets as possible, then cover it with olive oil and seal. The oil on top will keep it fresher for longer. 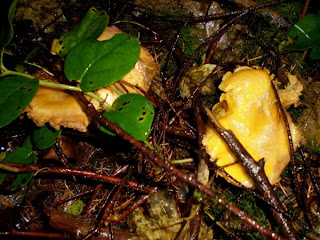