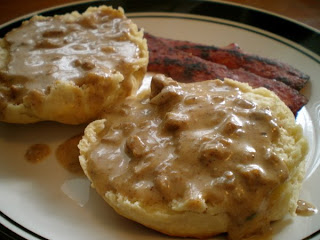 I've probably mentioned before that Keith and I have a biscuit tradition. Whenever he goes out of town for work, his first morning home again means biscuits and gravy. This has given me plenty of opportunity to perfect my biscuit technique, and I don't mind saying that I make the best biscuits we've ever had.

The gravy varies a bit, but the biscuits don't; once you've perfected a recipe like this one, you don't need to mess with it anymore. Today I had the chanterelle mushroom duxelles that I made on Monday, so I stirred them into my usual and made mushroom gravy. And then, upon discovering that I've never actually shared my recipe here, I decided to go ahead and gift it over.

There are some tricks to perfect biscuits. The big one is the frozen butter - when I first made biscuits I couldn't get that lovely flaky texture until I decided to treat biscuit dough like pie crust, and it worked. Lumps of frozen butter go into the oven solid and then melt as the biscuits bake, creating air pockets and that gorgeous flaky melt-in-your-mouth goodness.

The other trick is to place the biscuits quite close together on the baking sheet or in the pan. This will keep them from spreading outward, and they'll shoot upward instead, getting thick and fluffy like this: 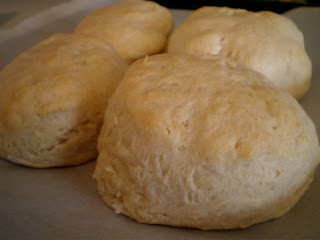 Pour warm water (not hot) into a small bowl and add the sugar and yeast. Whisk it up with a fork until the yeast is mostly dissolved, then set in a warm place (such as on top of the stove with the burners off).

In a separate mixing bowl, blend the flour, baking powder, and salt. Set aside 1 Tbsp of the butter; take the remaining 4 Tbsp and grate it into the bowl with a cheese grater. Use your hand to gently mix the butter into the flour mixture until it's evenly distributed but the butter is still solid and chunky.

By now, the yeast water should have a thick bubbly layer on top. Pour that into the flour-butter mixture, then gently stir it in until the dough gets too thick to stir. Knead it with your hands until it's even and all the flour has been worked in; at first it'll look like too much flour, but as you knead it, the whole thing comes together. Don't knead it for too long, just until the dough holds together and looks even throughout.

Sprinkle a little flour on the counter and run a floured hand over your rolling pin, then roll out the dough to about an inch thick. Cut circles with the top of a glass and put them close together in a cake pan or on a cookie sheet lined with parchment. Roll the scraps together and cut until you only have enough dough left for one biscuit, and then shape that one with your hands. They don't have to look perfect - uneven is okay. (If you have little bits of scraps left over, and you know anyone with chickens, they LOVE biscuit dough.)

Preheat the oven to 450 F and set the biscuit pan on top of the unlit stove. Let the biscuits rest and rise for about 15-20 minutes. It won't look like they're rising much, so don't worry if yours don't double in size like bread does. Just give them the time and then pop them in the oven for 10-12 minutes, until they're golden in color.

Melt the remaining 1 Tbsp butter and brush it over the biscuit tops as soon as they come out of the oven. Serve immediately while they're still hot. Top them with any gravy you like, or go the other way and drizzle them with honey, or spread them with jam. They'll make a great little breakfast sandwich - go all out and stuff a biscuit with fried chicken and honey for a decadent treat!