Don't read this post or look at the pictures if you're squeamish!

On Sunday, we processed five of the seven chicks that were hatched in our garage back in April. One was too small to be worth killing, and the other was a Thank You gift to Dawn, the woman who brought her two kids into town to show us how to do this. (She preferred a live pullet to lay eggs, so that one also lived.) It only took us a couple of hours to completely process all five birds, but it most certainly made for an interesting day.

I was a bit anxious in the morning, worried about how it would go. We went to breakfast with some friends of ours, but first I whipped up a pie crust, and when we got home from breakfast I channeled my anxiety into a strawberry-rhubarb pie. It was just coming out of the oven when it was time to get our day started, so it cooled in the kitchen as we worked outside. 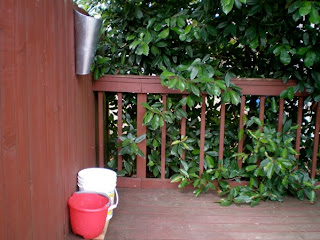 This is the killing cone, which we borrowed from the Urban Farm Store for free and hung on the fence. Underneath it are two gut buckets - one for the feathers and guts, and another to catch the feathers and heads during processing. We had planned to slit the birds' throats in two places, which is what Joel Salatin and some others recommend, but beheading turned out to be much easier. You can behead a chicken with a filet knife, or a paring knife! I had no idea!

We were joined not only by Dawn and her kids (who seemed to have a healthy respect for the process, but were not the least bit squeamish about it), but also by our friend Kelley, who has been primarily a pesco-vegetarian for many years and whose toddler daughter had never eaten meat before. Kelley also has egg-laying hens and has been debating whether to raise meat birds next summer, so this whole process was kind of a trial run for both of us to see if we could handle it. While we waited for Dawn to arrive, we sipped beer and wondered if we would pass out or scream.

Then it was time.

Dawn's teenage son processed the first bird, and then we did the rest, though Keith had to do all the killing of the other four (Kelley and I weren't quite ready for that yet). It was easier to get ready than I thought it would be; you simply hold up the chicken by its feet, and after a couple seconds of flapping around, the blood goes to its head and it loses consciousness. Then you slide it headfirst into the cone, so that it's neatly contained and the neck is easily accessible. 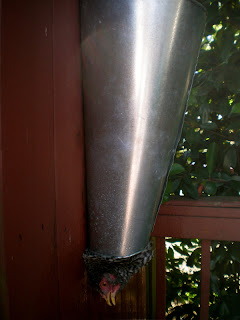 Then, you take your filet knife (or paring knife) and in one quick stroke - THWACK. 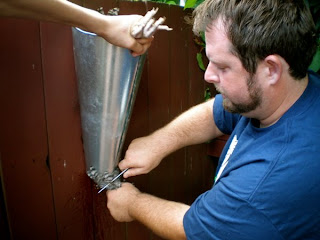 Now you leave the chicken there for a couple of minutes to bleed out. This is pretty quick and a lot less gory than I anticipated. There is a surprisingly small amount of blood in a chicken (and thank goodness for that). When it's done, you take your headless chicken, as Kelley does here... 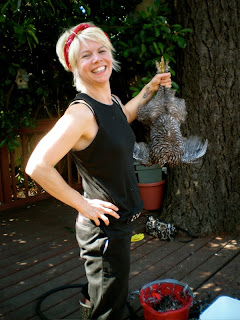 ...and dip it in some hot water for a second or two. This makes plucking a lot easier. Despite the blood and guts, I think the plucking was my least favorite part - most of the big feathers just come off in handfuls, but then you have to pick off all the little pinfeathers, the fluffy ones around the legs, and the soft hairy ones on the roosters, and you have to do it without ripping the skin. Two of them, we tore the skin and decided to take Dawn's advice and just skin them. It's a lot easier but you don't get the delicious chicken skin that way. So most of them, we plucked. 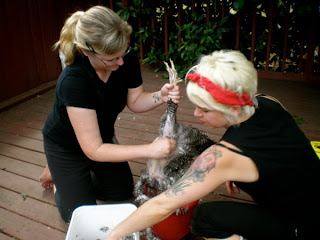 Ready for butchering now? This is when you cut off the feet, neck, and oil gland, and trim the wings. Here's Keith and Kelley double-teaming this process, while I helpfully snap pictures. 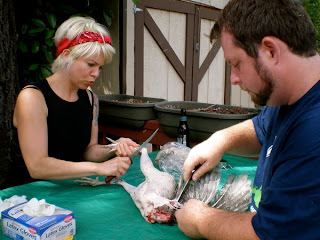 Now it just looks like meat! This is when you eviscerate them, cutting around the vent and scooping the guts out. Most of the innards come out easily in one scoop with your hand, but you do have to dig around in there for the trachea and esophagus, and you have to use your nails to pry the lungs off the ribcage. Those lungs really stick! And they're so very tiny, just about the size of a man's thumbnail. Hard to believe they can crow and cackle as loudly as they do, with those teeny little lungs.

If I were true to my heritage and the spirit of this process, I'd have saved the livers and hearts to fry up or cook into stock. But this is me, and I don't like organ meats. So they went into the gut bucket with the rest of the guts. 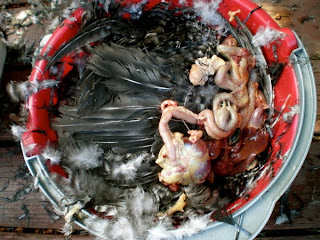 Rinse out the bird, take a good look to make sure you got everything out... 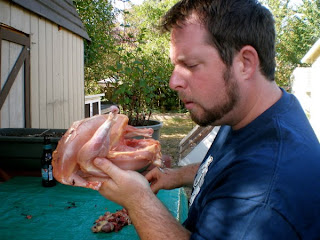 ...wrap the bird in a plastic bag, and you're done!

It all went really quickly. Neither of us passed out; we handled the whole thing really well, despite not being ready for the killing ourselves. Keith did the killing just fine. There was one unpleasant moment when he hit the bone of one chicken and took two or three loud squawking strokes to decapitate it, but generally we all performed quite well and didn't let the carnage get to us. 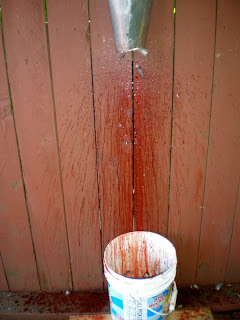 (I do have a picture of the inside of that bucket. I decided against posting it. I also have some video footage, which I also haven't posted, but if y'all express an interest in seeing it, then I'll upload it for you.)

When all five birds were processed, Kelley took hers and went home to her family. Keith got the deck cleaned up... 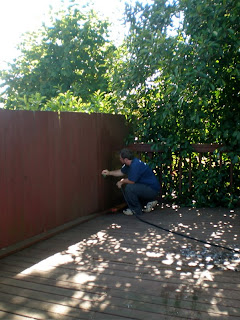 ...while I got started on dinner. Remember the Cuckoo Maran rooster, in the foreground of Saturday's picture? He woke me up on Sunday morning crowing enthusiastically, and on Sunday evening I rubbed him all over with schmaltz, sprinkled him with salt, and stuffed his cavity with salted lemons, fresh herbs, and elephant garlic. I roasted him up, made a lucious gravy with the pan juices, and served him with hot potato salad and that amazing gravy. 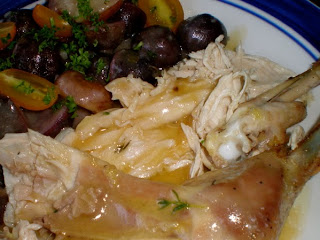 Kelley made beer can chicken with hers that night, outside in her lovely yard. 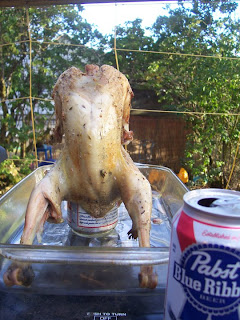 The verdict? Obviously the chickens were tiny, as these aren't bred for modern meat production and they take more than a year to reach full-size. Next year, we may get meat birds that grow faster. Each bird made multiple meals for our two families, though, so we can't complain about size.

The meat itself was quite chewy; I later learned that it's better to refrigerate the birds for 24-48 hours after processing to relax the meat. (Rigor mortis makes for chewy muscle!) So the next ones I cook should be much better. Despite the chewy texture, the flavor was incredible. We've got a running joke in our culture about the taste of chicken, or rather the lack thereof, but this chicken had a distinct and delicious flavor that must be what caused our ancestors to domesticate this bird in the first place. Think of the best European chicken stock you've ever had, then solidify that flavor into meat. I really enjoyed it.

On Tuesday I took the leftover carcass from my roasted chicken, all the lemons and garlic that were in it, some veggie trimmings and fresh herbs, and the chicken necks from Processing Day, and I made stock. I now have quite a lot of really awesome stock that I can use for a long time to come. And I still have two more chickens in the freezer!

So I feel pretty good about Sunday's work. It was deeply spiritual in a very earthy way; this is what eating meat is supposed to be like. I wonder if a lot of our social disconnect with murder and violence is rooted in this detachment from the death we eat. Factory birds, drugged and diseased, dismembered by machines and wrapped in plastic at the supermarket... Yeah, I can now say I consider that to be far more barbaric than the natural way. I have finally looked my meat in the face and taken responsibility for it, and I found it to be a positive and uplifting experience.

And that strawberry-rhubarb pie I channeled all my earlier stress into? I am pleased to say it didn't taste like stress at all. Once dinner was done and the kitchen cleaned, that pie tasted a well-earned reward for a good day's work (or a couple of days, if you count the day that Kelley and I spent picking and freezing the strawberries last month). 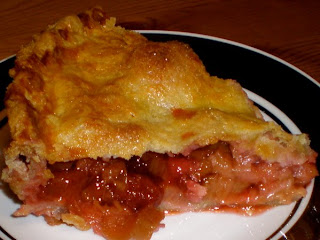 (I just noticed how many of my happy blog posts end in pie!)
Posted by Kimberly at 11:09 AM