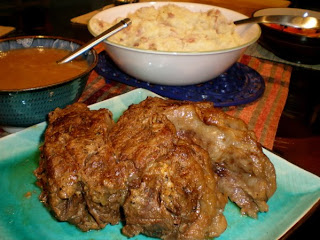 Inspired by a friend the other day who was having trouble producing a pot roast, I decided to treat Keith and his dad to one of my own, setting a challenge for myself in the process. See, the easiest way to make a pot roast - BY FAR - is in the crockpot. Slow-simmering at low heat keeps the moisture with the meat, preventing it from drying out as it often does in the oven.

But here in Redondo, we don't have a crockpot. So I had to take a leap and see if I could produce a moist, juicy roast in a dry heat. I am pleased to report that it was a resounding success; Keith proclaimed it the best roast he'd ever had, and I can't say I disagree. So here's the tricks I figured out.

First: The meat. Chuck roast is best - and, fortuitously, cheapest. You actually want a fatty cut here. Don't use nasty cheap feedlot beef, of course, but since you're paying the higher price for organic/grassfed, take some comfort in the fact that you're getting the cheapest cut of it. The tougher meat and chunks of fat are going to break down together in the oven and make that succulent, tender pot roast you've been daydreaming about.

Second: You need a TIGHT seal. Use the smallest container that will fit the roast, which means a small casserole dish and not a huge roasting pan for your 3- or 4-lb. roast. Then, just before you pop it in the oven, fold a sheet of foil in half and cover the top of the dish before you put the lid on. This makes a tighter seal and keeps the steam from escaping from around the lid.

Third: Let it rest, still sealed, for half an hour when you pull it out of the oven. This allows the steamy goodness to settle back down into the meat, rather than poufing out in a huge cloud when you take the lid off.

And now for the recipe.

Sprinkle the seasonings all over the meat and rub them in. Be generous with the Worchestershire, liberal with the hot sauce; whatever your tastebuds can handle. Meanwhile heat the oil in a heavy skillet until it's quite hot, then sear the meat for two or three minutes on each side.

Remove the meat to your casserole dish. Tuck the rosemary in with it, pour what's left in the skillet over it, then open up the beer and pour it in until it almost, but not quite, reaches the top of the meat. (You should have just a little beer left over to drink.)

I can't stress enough how important it is to use a decent beer - this is NOT the time for Bud or Coors or whatever you might drink while watching the game. Break out something darker. Last night I happened to have Sam Adams Cherry-Wheat Ale, which was just okay for drinking but the sweetness really brought a lot out of the beef. Better beer would obviously be better.

Cover the casserole dish with the foil and then the lid like we talked about before. Leave it in the oven for about an hour per pound of meat (cutting it short by 15 minutes or so is fine if you're rushed). Take it out of the oven and set aside, without removing the lid, for 30 minutes. Then transfer the meat to a plate and strain the juices into a measuring cup or bowl with a pour spout.

Heat a skillet to medium and toss in the flour. Give it a minute or two to toast a bit, and then add the butter or olive oil, whisking with a fork or whisk until it makes a smooth paste. Splash in a bit of the strained juices, whisk smooth, then add the rest of the juices in a steady stream while whisking continuously. Bring to a boil, stirring occasionally, until it thickens - this will only take a minute or two. Serve the gravy with the pot roast and your favorite mashed potatoes, with a salad or green veg on the side. 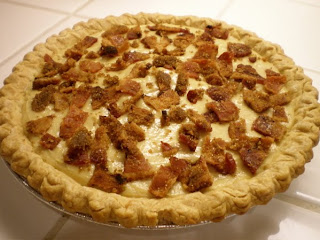 And just because I gotta gloat: This is the dessert we had after the pot roast dinner last night. It's an experiment I've been kicking around for awhile, maple-bacon cream pie, and I have finally declared it a smash hit. The pie is filled with a smooth, delicious maple cream and topped with chopped bacon, which has been candied in maple and brown sugar. The sweet-salty-smokey flavors all play so nicely off each other, and it was the perfect ending for this dinner in particular - especially since we had it with port!