Baby, It's Cold Outside!

Before I start laying out my plans for 2011, I have to share the last day of 2010. The morning of New Year's Eve found me selling pie again, as I whipped up some salted lavender caramel tarts for a friend who stopped by to pick them up for her family's New Year's dinner. It was a gorgeous day, if a frighteningly cold one - I don't think it got above freezing that day at all - and I wanted to get out, so Keith and I bundled our coats and scarves into the car and headed for Mt. Hood. 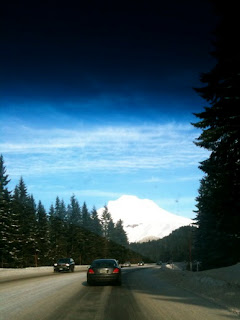 We didn't go all the way to the top of the mountain, since we had to chain up pretty early on. Three feet of fresh snow had recently fallen, and the sun was shining on a perfect New Year's Eve, so we parked as soon as we could to frolic in the thigh-deep snow. 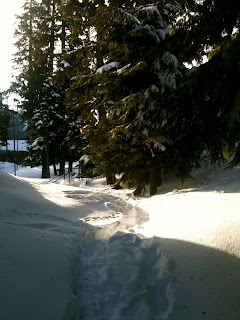 I'm still Southern enough that snow REALLY excites me. I've traveled a lot and lived in a variety of places, but I've never lived in a snowy area, and even in Portland snow is a rarity. So the chance to get up to the mountain and see all the lovely firs in the glittering snow, well, that always makes for a pretty awesome day. We spent most of the afternoon snow tubing and had a fabulous time while getting in some exercise. 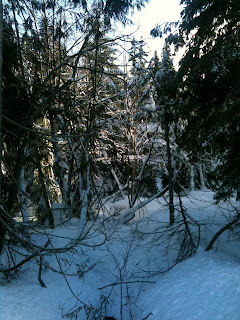 Once off the mountain, we made a spontaneous decision to drop by Lauro, our favorite special-occasion restaurant, for a fabulous dinner, and then we crossed the street to Pix Patisserie for dessert. We had a bottle of champagne someone had given us for Xmas, and the plan was to take it to the top of Mt. Tabor to toast the New Year under the trees while overlooking the Portland skyline, but it was about 20° F with a sharp biting wind, so we went on home to a warm crackling fire instead.

So now I'm finally getting a chance to sit down and have my New Year's assessment of the year before and year to come - well, I'm still in the middle of it, but it took me a couple days into the year to find the time to start! This year is already off to a busy beginning, and it's loaded with new projects.

I'm figuring out my sewing machine, for one thing; I've made some curtains and tote bags, and am currently working on a more complex project that was supposed to be a Christmas present for a friend but may wind up being a "friendship present" in another week or two. (Oops.) Once I finish this one, I'm going to make myself a couple of girly aprons and then ease myself into clothing (my ultimate goal) with a simple wrap skirt or two. So far sewing is a lot like cooking; my early blundering attempts are kind of cute in their incompetence, and I can tell this will be easy once I get in a lot more practice.

In other news, just to see how crazy I can make myself with project-juggling, I decided to go ahead with an idea I entertained over the summer. Over at my newest blog, Dinner With the World, I'll be documenting my attempt to learn more about my global neighbors and the unique variations of global cuisine as I cook a meal from every country in the world in one year. This should be a pretty interesting read, since I'll be juggling unfamiliar ingredients, a nominal commitment to kosher restrictions, and an effort to stick to seasonal Oregonian produce.

Oh yeah, and I'll also be juggling a business startup. After cultivating a dream of entrepreneurship for most of my life, it's finally time to make it happen. I'm currently saving up for a unique twist on Portland's food cart phenomenon, and have already begun selling my butter-flaky pies to friends and coworkers. By spring, I hope to be out there in the world, slinging pie to the masses. Learn more over at PortlandPiecycle.com (website operable, but still under construction).

Meanwhile, I'll be participating in Charcutepalooza 2011, a multiblog project wherein we'll all revive the lost arts of meat preservation. It's a logical next step after slaughtering chickens last year (and we're actually raising meat birds for real this summer!), and an especially hilarious development for this former PETA member and 12-year vegetarian. We're tackling one meat project per month, with the first up being duck proscuitto. I checked out Michael Ruhlman's book on Charcuterie from the library and can't wait to get started!

I'm also hoping to revamp this blog a bit, improve my photography and rework the design, but that's going to have to wait a few more weeks at least. It also looks as though I may be cowriting a cookbook later in the year - stay tuned for more on that project.

And of course, novels and screenplays await completion, along with the mountain of books I still need to read.