So I have this small, ugly kitchen that we're slowly working on. I have a decent-sized cookbook collection and they were all piled on a small table at the end of the kitchen, until we got a new huge dining table to put there. The cookbooks have been shuffled around to various spaces in other rooms and were resting on a bar table in the parlor when Keith, listless with cabin fever, decided he could build a shelf for them. 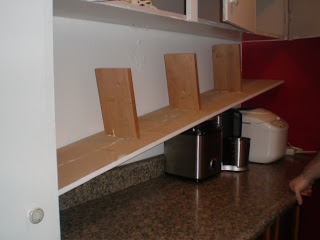 Without any prompting whatsoever by me - I was dealing with the pile of cookbooks in the parlor without any problems, though I knew it wasn't a permanent place - the other night Keith set up shop in the garage and began to tinker. Before I knew what he was doing, he had fashioned a shelf that would fit under the cabinets of my open walk-in pantry, and would mount to the walls and bottoms of the cabinets so that I'd still have plenty of room on the counter beneath. 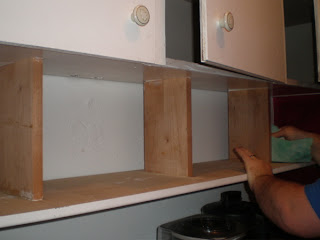 In the time it takes me to make dinner, he'd installed it, fastened molding to hold it in place, sanded and spackled where necessary, and begun to paint it. 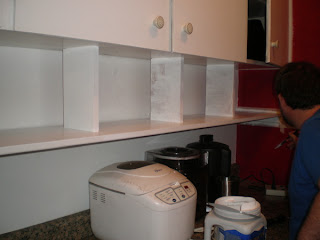 The next morning it got another couple coats of paint, and we let it dry for the rest of the day. 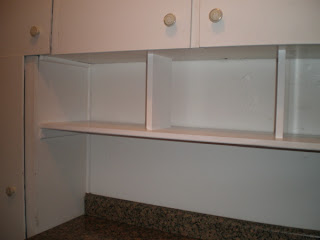 Keith did all of this by himself for about $5 in scrap wood and assorted supplies he found in the garage. The paint was the same paint we'd used on the kitchen walls. I had nothing to do with this project whatsoever, and I'm amazed at Keith's skills here. Just for purposes of comparison, here's what the kitchen looked like when we moved in. 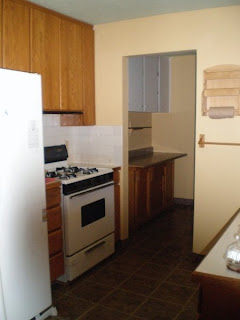 Here's what it looks like now. Still not great, but better! 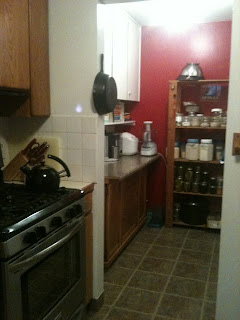 And here's my new shelf, which we loaded with my cookbook collection this morning. Keith had thought I'd have loads of extra space after the cookbooks were in. He underestimated my years of cookbook lust. 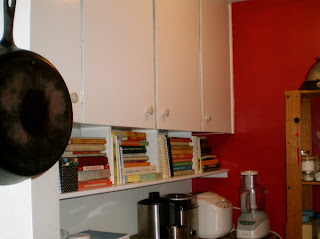 I love this guy even more than cookbooks. 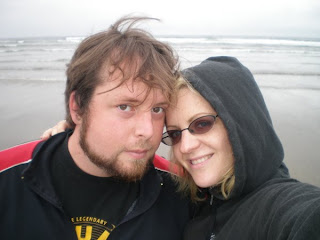