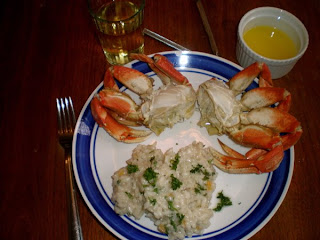 That joke never gets old, does it?

I don't usually do shellfish as a general rule. I like it - well, some of it - but I've got this combination of Jewish obligation and Catholic guilt that makes me feel like I'm doing something perverted whenever I eat shrimp. So I steer clear and give in only when I know it's going to be worth it.

I knew it would be worth it at the farmers' market a few weeks ago. It was the week before Christmas, the last market of the season before they close up for three whole months, and the vendors were doing their best to unload whatever they had left. Keith and I had done our shopping and were trudging back to the car when we passed a couple of fishmongers who were advertising local Dungeness crabs for $3 a pound. We bought two huge fresh crabs for under $5.

When we got home, we were busy with a lot of Christmas preparations, so we stuck the crabs in the freezer. A couple days ago, Keith was itching to cook them up, so he did. I was way too intimidated to do it myself - but no longer. It was quite easy, just a little messy but worth it. Last night we were at the grocery store and Keith found a tub of Dungeness crab meat for $25; he figures it contained about the same amount of meat as we got from these two crabs. We only had to work a little for it - but then, that was fun too, sitting down at the table to crack the legs and dig out the meat while nibbling little bites of risotto.

I made the risotto while Keith cooked the crabs. It's a pretty simple one, but I added the minced peel and some juice from my salt-preserved Meyer lemons, and I also stirred in some fresh parsley and a three-year aged parmesan Keith picked up in southern Oregon. I didn't have any good chicken stock to work with, and I complained that the risotto was bland before I added the lemon and parsley... but once they were in, wow! What a difference. It went great with the crab.

So well, in fact, that the next morning I combined the leftover risotto, leftover crab meat, and an egg, and then I melted the leftover clarified butter and fried up little crab-risotto patties for breakfast. 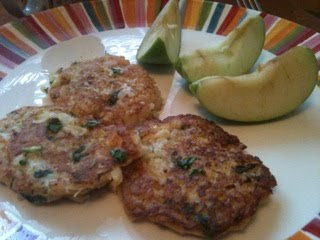 Sometimes guilty pleasures can be the very best kind.