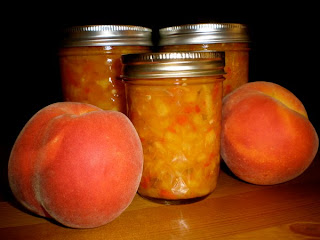 This is the summer of peaches.

Last summer was all about cherries, due to the snowstorm we had the winter before. We dehydrated cherries, we ate them fresh, we canned them and froze them. We stayed up into the morning on nights too hot to sleep, pitting and slicing cherries until our hands dripped with a Shakespearean stain. And by winter, when they were gone, we wished we'd put away more cherries.

There wasn't a bumper crop of cherries this spring, although we've had our share of fresh ones, so juicy from our excess rain that they burst bloody in our mouths. I preserved some in spiced brandy - they'll be ready around Thanksgiving or Christmas - and I got some more today that I'll preserve in red wine with orange and cloves. But this summer, we're mostly about the peaches.

It started a couple of weeks ago when I won a free flat of them in a contest: "Tell us a little-known peach fact, and the best one wins a flat!" My peach fact, which I learned from The Little House Cookbook, is indeed an interesting one - back in nineteenth-century America, before tropical vanilla became widespread, peach leaves were often used as the standard flavoring for custards, pies, and other desserts.

That tidbit launched a love affair with Baird Family Orchards peaches. We blew through that first flat in two days and are halfway through our second one; as we picked up our box of peaches from the Baird stand at the farmers' market yesterday, Keith mused, "I think I found my brand." Yeah, I grew up in the South, but I can't recall ever having such juicy, succulent peaches in my entire life. You could get high just sniffing them like glue.

Keith took a bite yesterday, moaned, and sighed, "This is the kind of fruit that launches wars."

So sure, we've eaten them fresh, drenching our shirts, slurping from our fingers as our elbows grow sticky. But I'm saving some too. I combined them with some of the hot peppers from my dad's garden, several different kinds, with a bit of lime, garlic, and cumin, in a sweet-firey peach salsa that I wanted to call "Atlanta Is Burning."

Others went into a frozen pie filling with marionberries, tapioca, and a bit of cinnamon and cardamom; that'll be delicious later in winter. Later I'll be preserving some in brandy for our waffle brunches, and I'm sure I'll think of more ways to keep them, because these peaches inspire hoarding.

Soon, when it's thirty-four degrees outside in the drizzling rain, dark at 4 pm, perhaps one day I'll open a jar, or bake up a pie. And then we'll remember the summer we spent dripping peach juice and sweat. Already it's a warm baking memory.
Posted by Kimberly at 12:16 PM