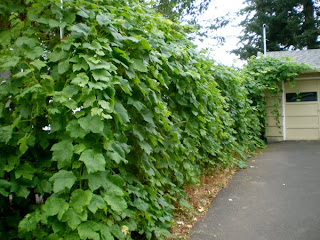 I have a hunch that very soon, I'm going to have enough grapes to share a few.

We need to get some carboys and get ready to make some white wine, I think!

I've been canning like it's 1899 these days. More corn salsa, some more peach salsa coming up... I've also put up blackberry jam, ginger-blackberry chutney (which is really too thin and runny to be called a chutney, but it'll taste good poured over baked brie at the dinner gathering I'm having tonight), some cherries in wine, and more.

We've been picking blackberries almost every day, since they're growing wild and abundantly all over the neighborhood; on Wednesday we went up to Sauvie Island to pick blackberries and lie on the beach for awhile. It was a nice break from work and cooking, but the canning work continues. Every time I get caught up, we go to the farmers' market or find a blackberry bush, and I'm off again.

I'm hoping to get started on pickles and tomatoes this week. I recently learned that the FDA, in their infinite... uh, wisdom, requires all tomatoes and tomato sauces to be canned with BPA in the can lining. Even the organic ones. As a woman who's hoping for pregnancy, I'd rather steer clear of BPA when I can, so that means I need to put up tons of tomatoes now because I use the heck out of canned tomatoes in the winter! Thank you, FDA, for giving me still more busywork. You never fail to impress me with the deepest depths of your competence.

And the pickles. Ahh, pickles. I'm currently looking at a 10 lb bag of beets we got for $9 on Sauvie Island, which is destined to become beet pickles and beet relish. And the pickling cucumbers are coming in, so I'll be putting up some dills as well as bread and butter pickles, which Keith has requested since we sampled some awesome bread and butter pickles at the farmers' market.

I had wondered just a month or two ago if canning season would come at all. Hilarious.
Posted by Kimberly at 5:28 PM