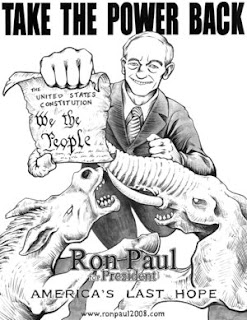 Recently two men were discussing politics, and I got pulled into the discussion. I admitted that I'd just been reading Ron Paul's latest book, The Revolution: A Manifesto, and they asked if I was a Ron Paul supporter. Wholheartedly, I said; I joined many others in writing him in on the presidential ballot last year.

"And how'd that work out for you?" one man smirked.

"Well," I smiled, "I cast a vote that I still feel good about. I don't think there are many people out there who can say that right now."

He had no response, and said nothing.

It's true, anyway. Ron Paul has achieved more grassroots support than any conservative candidate in recent history; he set fundraising records that even Obama didn't meet. Dr. Paul is one of the few people in our government who actually believe in our Constitution, our freedom, our liberty. I was a firm believer in his campaign before but this book laid out, better than any others, the direction that we the people should go if we want to remain a free country.

It's been interesting, out here on the West Coast, to watch people waking up from the Obama fantasy. I have a little sticker (no, it's not on my car) that says, "I was anti-Obama before it was cool!" To my surprise, I have gotten nothing but laughter and knowing smiles on it. A corporate whore is a corporate whore, at the end of the day. People are beginning to realize that rhetoric is the only significant difference between the Democrat and Republican sides of the dominant monoparty.

This year we have quite a lot of opportunities to change the face of Congress. Can we keep all that "CHANGE" energy going and actually make a difference this time? Can we get past the corporate media's shameless promotion of corporate whores and actually elect more people who, like Dr. Paul, will look out for OUR interests?

I'm feeling optimistic enough today to think, just maybe, "YES WE CAN."
Posted by Kimberly at 8:34 AM