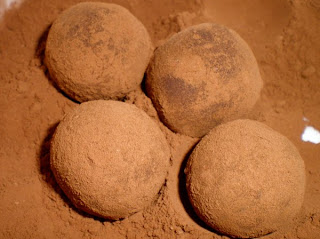 Everybody's got a hobby. My dad grows peppers. Not just your nice little bell peppers and jalapenos; he's got some habaneros, but that's not enough. He likes to grow the ultra-hot, record-setting peppers you can't buy at the store - Red Savina, Devil's Tongue, and his pride and joy, the world's hottest pepper, the Bhut Jolokia.

He's in Mississippi, with a nice long hot summer for growing these monsters. I got some mild anchos in my garden this year, but up here in Oregon, we just haven't got the summers. Hot weather makes hot peppers. So just before Christmas, I got a big box that included plenty of Dad's peppers. Some pickled, some dried, and one carefully wrapped fresh bhut jolokia.

That one bhut jolokia gave the entire box a faint whiff of smoke. Upon unwrapping it, we discovered that this unassuming little red pepper has a promising smoky aroma that makes your nose tingle when you sniff it. I knew this little pepper was special and I couldn't waste it on just anything. Besides, Keith isn't hugely into capsaicin burn, so a bhut jolokia chili dinner probably wouldn't go over too well.

... "Isn't that chocolate in the picture, Kimberly? What's all this talk about peppers?"

If you've never had chili peppers and chocolate at the same time, let me tell you that you are SERIOUSLY missing out. This combination is the best thing to come out of Mexico since the catchy tune of "La Cucaracha." Besides, when you eat something that's way too spicy and your mouth is burning, what do you do? You reach for a glass of milk to combat the capsaicin. I got the idea that some rich dairy would cut the heat of the bhut jolokia and allow its smoky flavor to really shine.

So the other night I decided to make truffles. Don't be fooled, that sounds so much more complex than it is. Chocolate ganache is easier than preachers' daughters. At its most basic level, you just pour scalded cream over chopped chcocolate and stir it until it melts, then let it set up overnight.

For these truffles, I chopped up 3.5 cups of good, very dark Ghirardelli chocolate and poured it into a big glass bowl. Then I poured a small carton of heavy cream into a big pot, carefully quartered the chili pepper, and stirred it into the cream. (In retrospect I should've added half a vanilla bean at this point too; next time I will.) Over medium heat, I brought the cream up to a very slow simmer, and infused the pepper into the cream for about ten minutes. Then I strained the cream and poured it into the chocolate, half at a time, mixing carefully until the chocolate and spicy cream were smooth and glossy. To tie all those flavors together, I slowly whisked in 1/4 cup of cold coffee.

It set up beautifully overnight and now I have what might actually be the best ganache I've ever tasted. The cream did in fact cut the capsaicin perfectly, so the ganache tastes like dark chocolate with a subtle, complex smoky pepper flavor and a warm heat that creeps up on the finish, deep in the back of your throat. The only problem is that now I can't make up my mind what to do with it.

The traditional way to finish a ganache truffle is to roll it in cocoa. So I mixed up a bit of quality cocoa powder and a touch of cinnamon and chipotle powder for just a little more spicy zing, and I rolled a few truffles to try it. (Interesting aside - did you know that truffles are rolled in cocoa powder so that they look like dirt-coated truffle fungus, hence the name?) I'm not a big fan of the dusty cocoa effect on these truffles though. It tastes good, but the mouthfeel could be better. So I might have to temper some more chocolate and dip these with a shell. I'm open to suggestions though.

I also tried the ganache with a little bit of sea salt, and that was fantastic, but impractical as a coating. Perhaps I'll salt the chocolate shell if I dip them.

Anyway I'll be giving these truffles away as I finish them, since Keith and I really don't need to consume this much chocolate. Besides, something as special as bhut jolokia ganache deserves to be shared! And I'm already thinking that this year I'm just going to have to try growing a bhut jolokia myself. Perhaps if I plant it in a pot and keep it warm in the house, I can enjoy this tasty pepper in a nice mole sauce in the fall.
Posted by Kimberly at 9:11 AM