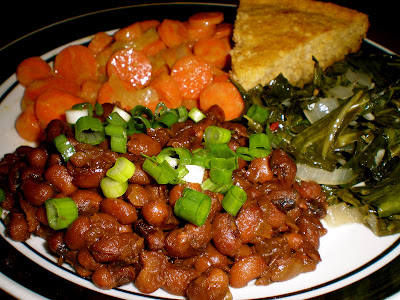 The back page of each issue of Organic Gardening magazine is given to an article by the magazine's editor, Maria Rodale. Her grandfather J. I. Rodale is widely considered to be the founder of the modern organic gardening movement; gardening and produce are still, after publishing, the family business. Presumably, Maria grew up around a wide variety of vegetables. So I was stunned to read this article, in which she described a vacation to a B&B near Nashville, where she was treated to "something they called peas." These weird little beans didn't resemble any peas she'd ever heard of, so she inquired and got an education on field peas - including the most famous of field peas, the symbol of the South, the blackeyed pea.

The article reminded me of a time two years ago when a friend from New York was visiting us and checked out the pantry as I made dinner. "What's this?" she asked, picking up a jar. "These funny little beans with the spot that looks like an A?"

Until then, I'd assumed that blackeyed peas were on a level with cornbread and ham. Sure, they're Southern, but everyone knows about them, right? Wrong, it turns out! I mentioned them on Twitter not too long ago when someone asked about a healthy standard weeknight supper, and I was asked repeatedly to explain blackeyed peas and how to cook them.

So here it is. Blackeyed peas are pretty hard to screw up, but with a rich, smoky molasses they can be so much more delicious than their humble nature implies. They're packed with protein, calcium, folate, and vitamin A, among other benefits. They're dirt-cheap and store for a very long time, so you can stock up and always have plenty on hand. They bring you luck when eaten on New Year's Day. They don't even need to be pre-soaked. And don't be fooled by Southern stereotypes - blackeyed peas do NOT need pork, or even any meat at all.

And the best part: They're at their best when left alone in a crockpot all day while you go to work. For an easy and nutritious weeknight supper, throw blackeyed peas in the crockpot before you leave in the morning, and then whip up a quick honey cornbread (here's my recipe) when you get home. Collard greens and copper pennies, as in the pic above, are nice but optional!

Note: You can use olive oil, but if you have toasted sesame oil, definitely use it here.

Rinse off the blackeyed peas in a strainer. If you see any shriveled-looking or darkened peas (or little pebbles, sometimes it happens), toss them.

Combine everything but the green onion in the crockpot and switch it on. The measurements don't need to be exact. Forget about it for 8-10 hours. Come home and give it a stir, and when the cornbread is ready, dish up those peas and sprinkle green onion on top.

If you're not making any other dishes and this is just a simple blackeyed-peas-and-cornbread dinner, try a pickle and/or some sliced radishes on the side. Raw veggies really sing with this, or sometimes I go the other way and have a few cubes of cheese. Just keep it simple!