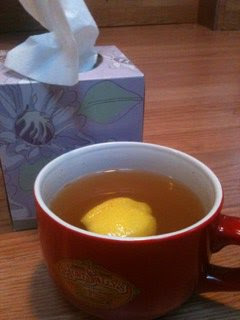 I haven't been sick enough to miss work since coming down with norovirus in 2006. Since easing myself onto a natural, organic diet some years ago, I've not been sick at all, and I have to admit I've taken a smug pride in the fact that I never get sick.

Pride goeth before the fall.

I write this near 7 pm on a Wednesday, after spending the entire day in bed - and a shame too, it looked like such a pretty day out. When I realized I was in no shape to go to work, due to this debilitating chest cold I picked up (after, mind you, eating processed foods at work again), I thought I'd get some writing done and maybe straighten up the house. HA. I haven't been able to stay vertical for more than five minutes at a time, and I've spent the vast majority of the day sleeping.

It's working though. I'm still not feeling great, but I feel a bit better than I did this morning. So I thought I'd share the best chest-cold remedy I know: the spiced brandy toddy. It'll help you get better in a hurry, and without a lot of scary drugs with all their side effects. Take one before you go to bed and you'll feel a little better, so you can go to sleep and let your body do the work of healing.

Squeeze all the juice out of the lemon half into a large mug. Drop a chunk of the rind in, if you like. Add the liquor, ACV, honey, cinnamon, and pepper. Top off with simmering water and stir until honey is melted and contents are evenly blended. Sip immediately while it's still quite hot.

Here's why it works:

The hot water soothes your throat, and also helps to raise your body temperature so your immune system doesn't have to work as hard to kill the infection. (Remember that we get fevers because heat kills off certain infections.) It's also psychologically soothing.

Honey coats your throat a bit, easing the pain and raspy feeling. It's also a powerful antimicrobial - you can treat minor eye infections with raw honey - which also helps to fight the infection. And it sweetens the taste of the other flavors, which might not be so enjoyable together otherwise.

Lemon is loaded with vitamin C, which we all know is a powerful immune-booster. The acid in the lemon juice and ACV also works to break up phlegm and clear your throat.

You can skip the raw apple cider vinegar if you really want, but its health benefits are many and it really does work. If you don't want to drink it, you can put some on a cotton ball and rub it on your chest, under your nose, and on your forehead. It works a bit like Vick's, but in my opinion it smells better and it's better for you. It doesn't taste bad in the toddy, either - it blends right in with the lemon.

Cinnamon tastes nice too, and it also has antimicrobial properties. The cayenne can also be skipped, but its flavor is unobtrusive and it helps if you're having sinus problems; we all know how spice can clear your head. I also find that a bit of cayenne helps to numb a sore throat.

And that brandy/bourbon/rum? It's soothing and helps you go to sleep, so that your body can work harder on fighting off the infection. If you don't buy it, remember that alcohol is also a key ingredient in NyQuil - but a nice hot toddy tastes a lot better.

And now I'm going back to bed. Wish someone was here to bring me some chicken soup.