Homemade Bacon, Homegrown Eggs: Carbonara as it was meant to be. 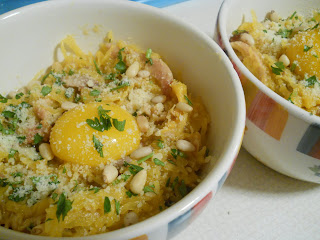 We ate this spaghetti squash alla carbonara two nights in a row, and would've had it again if we'd had more spaghetti squash. I'd call Charcutepalooza #2 a rousing success.

After curing sweet and savory bacon in the fridge for over a week, I borrowed a friend's smoker and some applewood chips, and fired the whole thing up in my garage since the day was drizzly (I left the garage door open, but it still smells like bacon in there). The cured pork belly sat in the smoker for four hours, at which point I moved it to a 200° F oven to finish off.

I noticed that before I smoked it, when I first removed the pork belly from the cure, it was kind of greyish and not that beautiful bacony pink. I was disappointed at first, but hoped that smoking would pink it up. Sure enough, when it came out of the smoker, I had this: 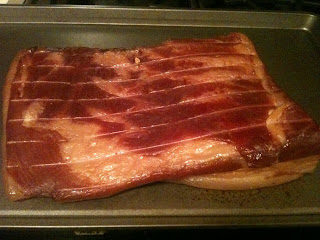 Michael Ruhlman, in his excellent book Charcuterie (which is the official textbook for Charcutepalooza), says to let the bacon cool to room temperature but adds, "Try a piece now though, straight out of the oven - it's irresistible." He's absolutely right. It was incredible. I shared a piece with Anne, my new roommate and half the genius of Fab Frugal Food, and we both had to stop ourselves from devouring the whole thing. While she ran out to buy a spaghetti squash, I found myself trimming the fatty skin off the bacon slabs while still hot, and chewing on that skin to suck out the warm, fresh bacon fat. So much for that Jewish Guilt.

That very night, we had to try using the bacon. So I put the maple-brown sugar bacon away for another use, and cut some of the savory bacon into lardons. Anne is currently on a grain-free diet, but I wanted to try a carbonara, so we went with a spaghetti squash recipe that Anne calls "low-carb-onara." 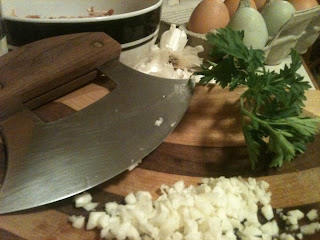 I can't find the recipe on Fab Frugal Food anymore to link to it, but I took some liberties with it anyway. I fried the lardons with a handful of garlic and some chopped fresh rosemary and thyme from the yard. Anne roasted the spaghetti squash and then raked it up with a fork until it perfectly resembled its namesake; it went into the pan with the bacon and garlic, while I whipped up three egg whites with one yolk, reserving the other two yolks on a plate. (We used one egg from each of my hens, now that all three are finally laying again.) I beat a ton of parmesan into the egg mixture, then tossed the squash and bacon with it, gave it plenty of pepper...

...and then we dished it up with pine nuts, fresh parsley, and a single yolk on top of each serving, mixing the raw yolk into the spaghetti squash to make a creamy sauce. Obviously I wouldn't recommend doing this with storebought eggs, but real carbonara is definitely a perk of raising my own chickens. I love this stuff. And with my homemade, flavorful, extra-tasty bacon cut thick into lardons... ohhhh my. Any word I could use in any tongue would be painfully inadequate. 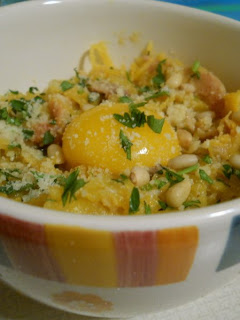 So Teenage Jewish Vegetarian Kimberly can huff off to her room and slam the door all she wants. I plan to start another batch of bacon this week. I'm moving on to the next phase of Charcutepalooza too - look for homemade corned beef next month, mmm! - but I think homemade bacon is going to be a regular thing around our house. I've never put anything this delicious in my mouth before and I want it all the time.

As for the spaghetti squash, I liked it better than the usual pasta. It had more texture, and its mild flavor complemented the carbonara really well. It wasn't as slippery as pasta, so it held the sauce better, and its nutritional content was way higher than noodles would've been. Score another point for gluten-free!

And what about the maple-brown sugar bacon I made? I fried up a little last night just to taste it, and it's a sticky-sweet-salty concoction that just begs to be used in a pie. Maple Bacon Cream Pie, my specialty, seems obvious, but I feel like a taste of home. So tonight, it's Elvis Pie. A graham cracker crust with butter and bacon fat, with a creamy peanut butter layer on the bottom, topped with a lucious banana cream filling, then garnished with vanilla sweetened whipped cream and chunks of this sweet-salty bacon. I can't wait.