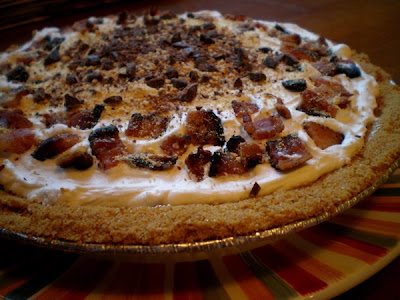 Wise men say
Only fools rush in,
But I can't help...

...licking every last crumb off the plate after sampling this Elvis Pie.

No kidding, y'all, this is hands down the best pie I've ever made in my life. And I completely made it up as I went along (thankfully I wrote it down as I went, so I can duplicate it later). Charcutepalooza is changing my entire outlook on food here; I've never been a huge meat eater (I was a strict vegetarian for 12 years, from age 11-23) and I've never liked pork, but I cannot get enough of this homemade bacon.

I have a friend here in Portland who is also not too big on meat, but she and I have been experimenting with old-school meat production the way some people (ahem, certainly not us) have experimented with recreational drugs. Last summer we slaughtered five unfortunate chickens who'd been hatched in my garage and raised in my backyard, where they also met their end. At Christmas she hesitantly volunteered to try my maple bacon cream pie (look up to your right at the Kickstarter link, there's a picture); she loved it.

So when I was making my own bacon for Charcutepalooza, she was interested, and her husband owned a little meat smoker. So I borrowed their smoker with the promise of sharing the bacon once it was finished. I did bring them some bacon tonight, but they let me keep the smoker awhile longer, so to thank them I took the opportunity to try out an idea I'd been kicking around for awhile: Elvis Pie. 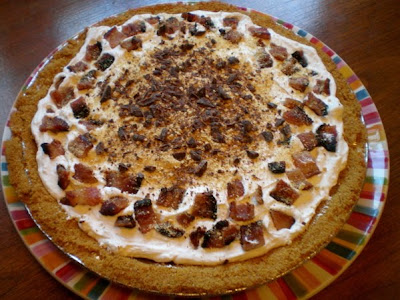 The only thing it needs is a bit more bacon. Otherwise, it's perfect. I was inspired by the sandwiches that famously killed the King - peanut butter, banana, and bacon, sandwiched between slices of white bread and fried crisp in butter and bacon fat. According to legend, Elvis ate two of these every night. Sure explains how this... 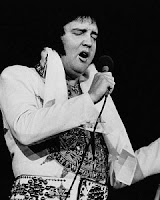 So just don't eat two of these a day. You still gotta splurge sometimes!

For this pie, I made a graham cracker crust with vanilla sugar, butter, and bacon fat (of course using the fat from cooking my homemade bacon, cured in maple and brown sugar with a touch of cloves). Then I layered in a peanut butter cream filling sweetened with brown sugar and honey. I topped that with a layer of fresh sliced bananas - here's where I'll also add more bacon when I make this again - and then I poured a lovely vanilla custard over it all and let it chill until firm.

Just before serving, I whipped cream with confectioner's sugar, vanilla, and a little more bacon fat. I spread that over the top, then sprinkled it with graham cracker crumbs, chopped chocolate, and finally... that beautiful thick-cut home-cured sweet bacon. 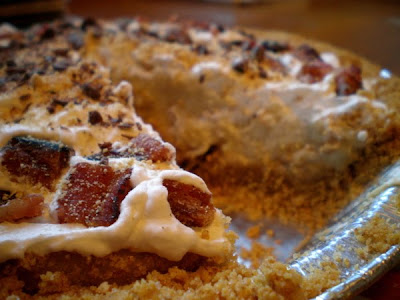 A pie fit for the King! But, except for the one slice I sampled here, I gave it to my friends. Because they're awesome, and because one thing I've learned about meat production and preservation is that it tends to be a community endeavor. And that's why it goes so well with pie.