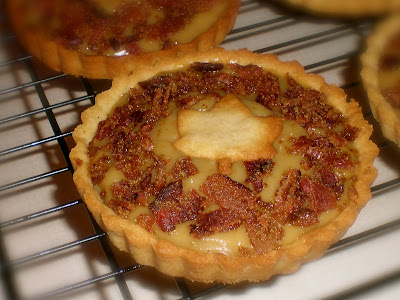 I know, I know, I haven't posted in awhile. I've vaguely alluded to my being busy, but now I can finally tell you what I've been so busy with - trying to go into business!

I sold several pies over the holidays (including my most popular offering, the maple bacon cream pie shown above) and since then I've been busy building my Kickstarter page. If you're unfamiliar with Kickstarter, it's a pretty great concept. I've built a page with text and video to explain my concept - click here to see it! - and I'm offering fun rewards to people who back my project.

If I collect enough pledges to fund my project by April 4, then I'll be able to purchase and outfit my own food cart, a Northwest-influenced Southern one called Butterpat. I'll specialize in pie, but I'll also be offering my famous biscuits with gravy and my homemade herbal jelly, as well as plate lunches and other treats. If I don't get enough pledges by April 4, then nobody gets charged and I'll just keep saving up bit by bit. But I've gotten a lot of great feedback from the Portland food cart devotees (we call ourselves "cartivores"), so I'm optimistic!

Spread the word, tell your friends, point everyone toward the page! If nothing else, you can chuckle at the video while I look like a goober to the tune of B. B. King.