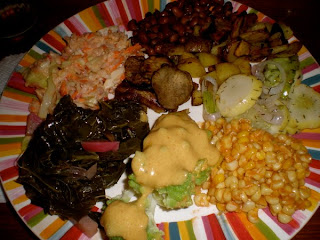 Haven't been back to Dixie in two years, but I'll be there this afternoon. My mother has generously flown me out to see my family for a week; this morning I caught a quick shuttle to Seattle and in a couple hours I'll be airborne for Memphis.

Every time I go back to Memphis (since moving away over six years ago), it's a different town. I've never seen a town change so much. I'm interested to see what's changed this time. And I'm REALLY looking forward to the drive down into Mississippi to see my brother, who's in college there - I have a deep love for rural Mississippi, especially when I get off the interstate and amble down old highways through towns with drawling names like Holly Springs and Tupelo, names that pour from the tongue in a thick slow stream like sugary tea.

Holly Springs is also the former home of my favorite Delta bluesman, R. L. Burnside. All day I've had one of his songs in my head, "Goin' Down South"...

Last night I had to use up the veggies in the fridge before they went bad, so Keith and I made a big veggie feast together. It turned out in my usual style - Southern with a Northwest spin - and we had a couple of friends over and had a wonderful time. The mostly-vegan menu:

It was a pretty good send-off, and now I'm in the Seattle airport waiting for my flight. Ironically, I'm flying Delta to the Delta. I hate to fly SO VERY MUCH but I've got the latest Hemingway (hee hee, his last novel) and some of my own writing to keep me occupied, so hopefully four and a half hours in a tiny seat will go quickly. Knock wood.
Posted by Kimberly at 10:26 AM