The High Cost of Cheap Eggs 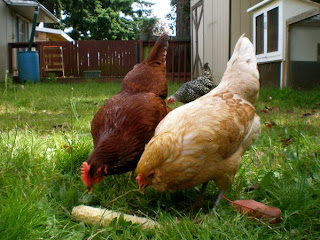 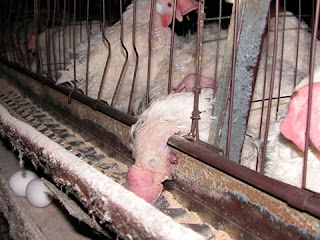 Kinda says it all, doesn't it?

If you haven't already seen the excellent 2005 documentary Wal-Mart: The High Cost of Low Price, drop what you're doing and go watch it. Now. Every American needs to see it, and most of the rest of the world does too.

Now that you're back... I had to share this excellent article, "The Price of Cheap Wal-Mart Eggs." While this is not just a Wal-Mart problem (and invoking the name of the Evil Empire unfairly lets other less infamous retailers off the hook), the article does explain the reason why cheaper is NOT better when it comes to food production. Be sure to follow the links within the article.

And just for contrast, a funny story:

Our hens have a clearly established pecking order, with Lucy on top, Jane in the middle, and Lana far below both of them. This means that Lana rarely gets to enjoy any of the treats. Jane is fine as long as she gets hers, but Lucy will go out of her way to make sure that Lana doesn't get any treats at all, even if it means she herself misses out. (Notice in the picture above how Lucy and Jane enjoy that nommy corncob while Lana hangs back for the grass.)

So the other day, I was pickling beets - ten pounds' worth, so I had a huge bowl of peels and trimmings to take out to the hens. They dove right in and spent much of the day nibbling at those beets. Later in the afternoon, Keith stepped outside to check on the garden, and was startled to see Lucy looking like a lion at a carcass. The feathers all around her mouth and face were dripping red as she gobbled those beets.

At this point, along comes Lana, deciding to see if she can step in and have some beets too. Lucy roared up onto her tiptoes, wings spread, bloody beak open like a velociraptor from Jurassic Park; Lana shrieked and bolted across the yard, and Keith said for a second he almost did too.

I'm happy to report that our little dinosaur is no longer beet-stained, although the inside of the coop kind of looks like they're all dying from massive internal bleeding. But it's not true. In our case, though not in Wal-Mart's, it's just beets.

I pray that more healthy chickens may soon quarrel over fresh veggies on a sunny summer day.
Posted by Kimberly at 1:35 PM