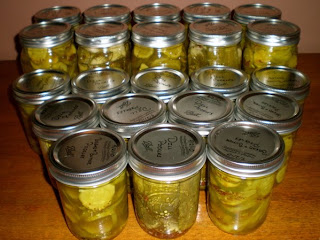 Whew, it's been a canning week! And freezing, too. I've put up enough rhubarb for three or four pies, I've pickled peaches, I've pickled beets, I put up ginger-beet relish, I made mozzarella cheese, I made bread, I made biscuits, I blanched and froze 20 ears of corn (some on the cob, some cut off), and I pickled 20 pounds of cucumbers. I now have ten quart jars and sixteen pint jars full of pickles - half kosher dills, and half bread-and-butter. They're cheerfully pickling away on my kitchen table at the moment.

Yesterday was interesting; Keith and I took a break from canning to help a friend of a friend cull her chicken flock. She had several old biddies who weren't laying eggs anymore, and there were more chickens than her coop could handle, so some of them had to go. This was the first time any of us had seen inside an older hen, and let me tell you, it's NOTHING like the inside of a little one! It was an egg machine in there! Dozens and dozens of yolks in varying sizes, a big veiny egg sac, just some very complex works.

I always kind of thought the egg was a byproduct and they just made one at a time, but I have a whole new respect for my laying hens now. The female chicken is built to make eggs, and lots of them. I'll always remember seeing all those yolks, some full sized and some smaller than a dime.

Today I'm giving the house a much-needed scrubbing and then making some pizza dough and biscuits for the freezer. Maybe a pie crust or two, as well. I also need to stew the aforementioned hen. She's too old to roast (her meat will be all chewy), but she'll be full of flavor and make an excellent stock when simmered for six hours or so with some veggie scraps. I like to reduce my chicken stock until it's thick and strong, then put it into ice cube trays and freeze it. I load the chicken stock ice cubes into a big freezer bag and throw one or two of them into almost anything - pasta water, risotto, gravy, whatever. It's a handy way to keep it.

So happy Labor Day to all who labor. I'm right there with you today!
Posted by Kimberly at 10:52 AM