Joel Salatin on the Revolution 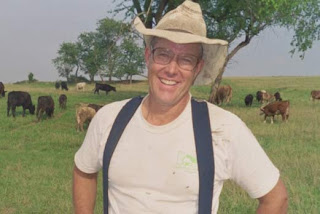 I just had to share this article - actually an excerpt from Joel Salatin's foreword to The Raw Milk Revolution: Behind America's Emerging Battle Over Food Rights. If you don't know Joel Salatin yet, you should - and if you know me, then you know him, because I admit to devoted fellowship in the First Church of Salatin, Farmer. I know I talk about him a lot. Have been ever since seeing him in Food, Inc. and reading his groundbreaking, revolutionary book Everything I Want To Do Is Illegal.

It's not just his farming technique, it's his worldview, his classically American belief in liberty and the pursuit of happiness. Joel Salatin is at the forefront of a movement which recognizes that a corporate-controlled government oligarchy is NOT equipped to decide what we should eat, how we should conduct free enterprise among neighbors, or how we should nourish our families. I'll raise a glass of my grey-market, life-affirming raw milk to that philosophy - especially as Congress moves forward on current legislation which would effectively ban organic farming and farmers' markets (yes, really).

So anyway, the article. I can't repost the whole thing here, so click the link to read it.

Isn't it curious that at this juncture in our culture's evolution, we collectively believe Twinkies, Lucky Charms, and Coca-Cola are safe foods, but compost-grown tomatoes and raw milk are not? With legislation moving through Congress demanding that all agricultural practices be "science-based," I believe our food system is at Wounded Knee. I do not believe that is an overstatement...

Is it not, indeed. Jackbooted government thugs are harassing Amish farmers like Daniel Allgyer and Emmanuel Miller while Monsanto contaminates our groundwater and other corporations infect our children with E. coli and diabetes. And Congress, predictably, comes down on the side of its corporate sponsors.

Joel Salatin is right, we are absolutely at Wounded Knee. Voting out the incumbents and casting real votes for freedom this November, that's not just about taxes or Obamacare or who looks better on TV. This election is about our very survival, our fundamental right to choose nourishing, life-sustaining foods. There's nothing more basic, or more important, than that.
Posted by Kimberly at 9:45 PM