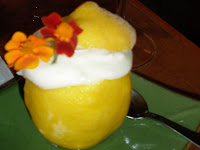 I had a great birthday, with dress shopping at Naked City and ice skating at the Lloyd Center (where Tonya Harding trained!), but, as is often the case with us, the real highlight of the day was the meal. After a big breakfast and a long nap, and then shopping, we were ready for an early dinner about four. This worked great for us because Pok Pok was empty at that hour. They weren't serving the full menu yet, so we ordered cocktails and a Pok Pok Special to split.

Words cannot describe how good this is, let me tell you. The special is described as "half a roasted game hen with a small green papaya salad (papaya pok pok) sticky rice and dipping sauce." That's like describing the Swiss Alps as "mountains and some snow." In actuality this bird, served in chunks and meant to eat with your fingers, has a texture almost like creme brulee, all moist and creamy under a crisp, crackling skin. It came with two sauces, an herbed brown tamarind sauce and a spicy sweet-sour sauce that fully engaged every bud of the tongue. We dropped the sticky rice smack into the leftover juices just to make it last. The other side of the plate offered the Thai special that the restaurant was named for, papaya pok pok. Keith couldn't eat much of it; I loved it, but I was paying for it later. This is a salad of shredded crunchy green papaya, bashed in the mortar and pestle with enough hot Thai chiles to cook your gut, drizzled with lime and sprinkled with salty peanuts and cashews. Every kind of taste is at work here - sweet, salty, bitter, umami, tart, and oh that spicy heat. It took a lot of water and all of my apple-vinegar gin rickey (yes, I said vinegar) to get it down.

Once the dinner menu opened up, we ordered again. Pork skewers with a coconut-satay dipping sauce for Keith, and for me, grilled rare flank steak served as a salad with mint, lime, roasted hot chiles, and shallots. We shared more sticky rice and each took a side of cucumber salad with still more hot chiles. I grew up on cucumber salad in hot weather; nice cool cucumbers with a zing of tangy vinegar to cool you off when the weather and spicy food are burning you inside and out - but this one has hidden hot peppers that creep in for a sneaky sucker-punch. I was dipping strips of steak into Keith's bowl of peanut sauce and dropping leftover lime wedges into my water cup for relief. By the end of the meal I was completely cooked, but satisfied, and flying on a magic carpet of endorphins and gin.

At this point we stepped outside into a temperature of 105 and decided it was time for ice cream. But not just any ice cream. We headed a few blocks down the way to Pix Patisserie, best known for their chocolates but in the summer they craft the most stunning gourmet ice cream. Keith ordered a chocolate-based port wine and fig ice cream, served as two small scoops in a lovely little glass dish and accompanied with a small glass of port. I had trouble deciding but settled on a special lemon sorbet, served in a hollow lemon (see pic above) with a glass of Kir Royale. Sorbet was never so creamy. You could've told me this was made with full cream and I would've believed you. I was scraping the insides of the lemon for every last drop, relishing the sensation of all that cool creamy citrus cleansing out the hot peppers and broiling sun. I lingered over that lemon sorbet long enough to read an entire newspaper, licking tiny scoops from a doll-sized spoon, and could've cried when none was left.

I haven't eaten much today. I think I'm still digesting the memories.
Posted by Kimberly at 12:26 PM