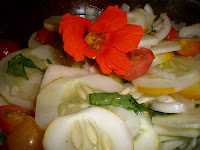 It's so much more fun when it's Martha Reeves singing about it. Yesterday we had a high of 102, and it'll be getting up to 104 today and tomorrow. This has never happened in the history of Portland; just seven months ago we had the heaviest snowstorm in 40 years, and now we're in a record-breaking summer. *sigh*

So we invested in some temporary air conditioning, which leaked gallons of water all over my little patio table outside on the balcony, ruining the paint. I'll add that to the list of things to paint when we move, I guess, but what an irritant. We camped in the living room with the air conditioner last night (and those who know me know I HATE air conditioning, but any port in a storm) and we actually did have a nice time watching movies while doing more preserve work. We peeled several heads of garlic so I can pickle the cloves today, and trimmed green beans for pickling too, and finally finished The Lavender Project. Back when my brother was visiting a few weeks ago, we each picked a huge handful of lavender at a farm near Hood River, and I dried it in the windowsill. Then we had to pick the buds off each stem to transfer to a baggie for storage. We've spent our downtime for the past several days stripping lavender buds, and finally wound up with a cereal bowl full of beautifully fragrant dried lavender. It'll be enough to give some away and still have plenty to cook with for the year.

In the house news, we will not be signing the papers as planned today, and likely will not close this Friday after all. Still more paper hoops to jump through, and maybe we'll close next week. I'm starting to understand why Dennis Miller once compared the home-buying process to a gangrape. Just when you think it'll all be over soon, someone else starts in and you wonder if you'll ever make it through.

But overall we're okay. We have food and water and a place to get out of the worst of the heat. We're living off fresh fruit and cool salads, my favorites. Things could be a lot worse on this Last Day of My Twenties. I'm going to be pickling all day - cucumbers, green beans, and garlic - and I have some whole wheat flax dough to make rolls with in a minute. Going to try to get some writing done and maybe get out of the house later, if I can bring myself to get dressed. In this kind of heat, even my breeziest skirt looks like a wool burqa.