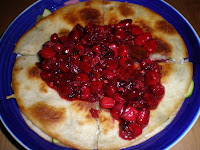 Today kicked off canning season in style, with five jars of marionberry jam and a quart of spiced baby pears. I had a big day today, which began with a loaf of tomato-basil bread studded with chopped garlic whistles. (I discovered garlic whistles, which would grow up to be flowers on the garlic plant if we didn't pick them first to enjoy their tasty flavor, at the farmer's market a few weeks ago and am currently putting them in everything.) I made the jam while the bread rose, and fortunately Keith helped me with putting up the jam as I threw together a version of my friend's incredible Raspberry Lime Rickey Granita, with black-cap raspberries. But then I had to throw the granita and bread dough into the refrigerator to go see a "Harry Potter" matinee.

The movie was pretty good, if completely unfinished with a disappointing ending. After the movie we went to Ace Hardware for a torch so that I can make lavender creme brulee for my friend who's coming to visit on Sunday. We pondered the various butane torches, debating whether to get a big manly one with which to flambe the kitchen, or a little tiny handheld version, and the store manager genially suggested, "For creme brulee?" Why, yes. He then proceeded to follow us about the store for the next five or ten minutes, suggesting cassoulets and the propriety of French versus Mexican dinners for the creme brulee aficionado. As we paid and left, he added one additional suggestion: "Dust some bananas with brown sugar and cinnamon, and then use the torch to caramelize it." Oooh, sez I. "It's tough," he groaned ruefully, "but somebody's got to."

Our culinary tour then took us to the grocery store for the creme to brulee, and then it was back home for dinner. Too effing hot to cook, with a high of 96 today. But the tummy was growling, the granita finally in the freezer, bread in the oven. So it was quesedillas stuffed with baby zucchini and zucchini flowers - and of course, garlic whistles - with extra-sharp white Tillamook cheddar. We topped them with some of the amazing currant salsa Keith made earlier in the week. I never thought a MexAmerican meal could be such a religious experience, but it was.

Had a longer agenda of things to cook today, but it is hot and I was tired, so I just preserved a quart's worth of tiny baby pears we bought from a farm in the Hood River Valley last week. They ought to be delicious later, and pretty healthy too - they're just floating in apple juice and mulling spices. There was one little pear half that wouldn't fit in the jar so we put him out of his misery, sharing a fork as we watched music videos online.

Now I want something icy, and wet, and sweet, and I'm hoping I can cool off in time to get some sleep tonight. Got a long day tomorrow of cleaning the house and test-driving corn muffin recipes for a friend's wedding next weekend. Typical summer... you never remember the details until you realize they're the same every year.
Posted by Kimberly at 10:39 PM