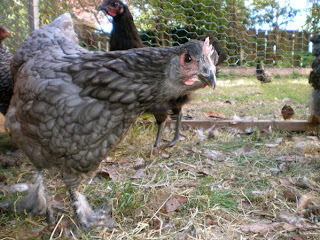 The chicks will be 15 weeks old on Tuesday. Most of them are Cuckoo Marans, and I've been reading lately that Cuckoo Marans make the most delicious and succulent meat bird! Yay! They also lay gorgeous dark chocolate-colored eggs, so the one lucky survivor out of this batch should make a nice addition to our egg basket.

The main reason I ask is because I haven't noticed any of the telltale signs. No saddle feathers, no spurs. I've only heard one crow, and of course I was changing the laying hens' water at the time and wasn't looking, so I have no idea who crowed (and yes, I've read that hens will occasionally crow too, so that's not necessarily an automatic rooster sign). The other reason I ask is because I'm pretty sure of the Marans and the Cochin - they look pretty hen-like, with one minor exception - and I fear that the Australorp may be my late-blooming cockerel.

It figures. A purebred Australorp was the ONE breed I really wanted, and we only got one out of the eggs Lana hatched... out of seven chicks, it figures that the one I really wanted would be a rooster I can't keep.

But that's not definite! You tell me what you think! (And I apologize in advance for the picture quality - it's pretty difficult to shoot chickens with a digital camera, as they don't stand still for long and the stupid camera has a delay on it.)

Here's the two most likely candidates. Of the seven, five are obvious hens. These two we call The Comb and The Australorp. 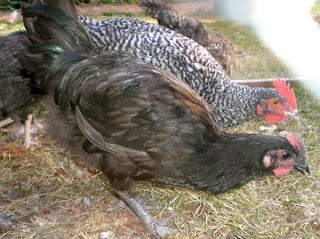 The Comb has a pretty roosteresque personality - large and in charge. It's by far the biggest of the chick flock, and sports one really impressive comb and wattle. The only thing is, Jane (our Rhode Island Red) also has a dominant personality and a spectacular comb and wattle, but she is most definitely a laying hen. And going by The Comb's wing feathers and body type... 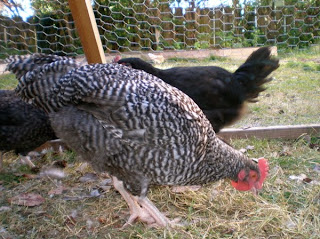 ...I'm kinda thinking she's a hen after all.

Which leaves us with the Australorp. No saddle feathers that I can see, but there is that proud stance... 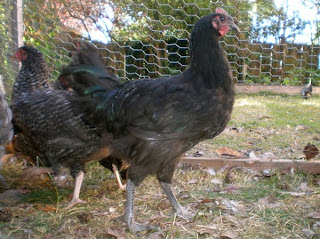 ...and that spectacularly beautiful upright tail. 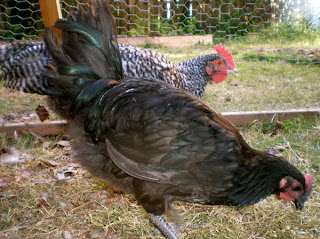 But what about the wing feathers? They don't look like long, pointed saddle feathers to me. 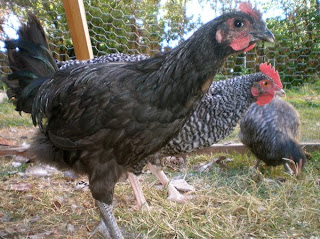 So what do you think? Rooster-in-training, or a very pretty pullet?

UPDATE: The word is in from the experts - BOTH of them are roosters! DARN, DARN, DARN on that Australorp. The Comb... eh, looks pretty tasty, doesn't he? We'll freeze him for a nice company dinner! (Now I want to go doublecheck the other five.)

2nd UPDATE: This morning I woke up with the cock's crow. Literally. It's another week or two until slaughter time; I hope my neighbors don't lynch me first.
Posted by Kimberly at 7:20 PM