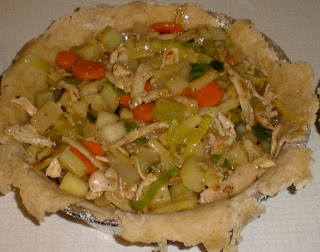 It's a slow week, this downtime between Christmas and New Year's. A lot of people are off work, and while the bustle of the holidays is mostly over, it's still cold outside. This is a good time to fill up the freezer with quick, easy dinners that can go directly from the freezer to the oven for a home-cooked meal requiring zero effort or cleanup. And they make great gifts for busy people; everyone likes a hot meal, and what's more comforting than pie?

This is a chicken pot pie that I came up with a couple years ago. The filling is loaded with veggies and a dose of flaxmeal, making it considerably healthier than a packaged pot pie from the grocery store (ever look at the calorie count on those things? Yikes!!) and it tastes better too. The recipe makes enough for two pies, so it's easy to make one for dinner right away and another to put in the freezer for later. You can put it in a traditional double crust, or dump the filling into a casserole dish and top with puff pastry, pie crust (latticed or whole), mashed potatoes, colcannon, or biscuit dough.

In the picture above, it's a double-crust pie with a homemade cheesy-butter crust that has savory herbs mixed into it. I took the picture just before adding the top crust and trimming the edges.

Preheat oven to 350 F (175 C). Squeeze lemon juice over the chicken and sprinkle with rosemary (or oregano or equivalent herb). Bake 20-30 minutes or until chicken is done. While it cooks, prepare:

Saute onion in olive oil until it just starts to turn translucent. Add remaining veggies and garlic, and cook (you will need a huge skillet or a wok) until mostly done. While it cooks, mix up:

Pour over the veggies and cook, stirring often, until gravy thickens and veggies are cooked. By now the chicken should be done, so shred it and stir that into the filling, and you're done. Now it goes into a bag or into the pie/casserole presentation of your choice, and then baked at 400 F for 30-45 minutes (depending on the topping) or 60-75 minutes if frozen.
Posted by Kimberly at 10:40 AM