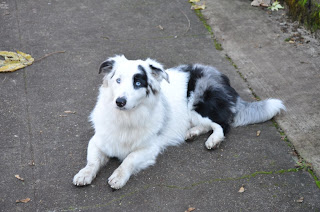 So now, after two people, three cats, and four chickens, another soul has moved into this house: our new dog, Milton!

He's about a year old, so intelligent and obedient. He's been very well-trained already (though of course we still have work to do) and I just can't get over how smart he is. And isn't he beautiful? He's an Australian shepherd - Corgi mix, with that long Corgi body and short little Corgi legs but that beautiful silky Aussie coat.

He has a boundless source of energy but he's just so lovable. We really lucked out in finding him!

I'd really like to get him into agility classes next month - he's so smart and energetic, with that herding mentality that really enjoys work. He'd have a great time doing agility training. I'm hoping he'll be a good exercise motivator for both of us, at any rate - he already got us up and out on a freezing cold morning for a nice long walk.

The cats aren't too thrilled about him but I'm hoping they settle down and get used to him. Davey is already warming up to him (he's our friendliest cat, easily)... Roxy is still growling at him when he gets too close to her, and Fry is still hiding. They'll have to get used to him eventually though, right? Poor guy, he just wants to be everyone's friend!
Posted by Kimberly at 10:20 AM