(With apologies to MTV's "Pimp My Ride.")

Back in August when we took in Lucy, Doris, and Bette, we also took in their coop. We were going to build one, but the girls' original owners offered us the coop as well, and it was cheaper to rent a U-Haul and take that one than to build a new one from scratch. Took less time, too. The catch is that it was meant only as a place to sleep and lay eggs; the hens would spend the day just free-ranging. We learned the hard way when we lost Bette that a bit more protection is necessary.

So every morning we'd get up first thing and move the girls from the coop into an enclosed run that we'd already fixed up. Then every evening, we'd have to move them from the run back into the coop again. Once Lana and Jane joined our flock this became an odious chore. They didn't like to leave the run, but we couldn't let them sleep in there because of nighttime predators, so we'd have to catch them. All the many ways of catching them involved wings flapping in our faces and chicken doody on our jeans, so we were eager to leave it all behind. We decided to go ahead and build an attached run onto the coop, and renovate the coop itself while we were at it.

Here's the coop as it started out: 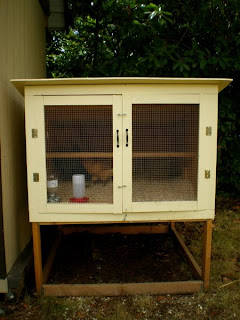 And here's what we ended up with: 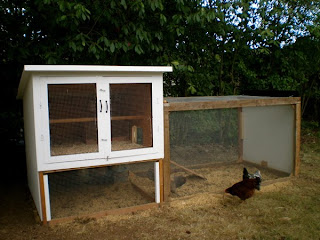 It had to be painted anyway, since the original owners just painted the bare plywood without priming it first and the wood was already starting to warp. We also hooked it up with electricity! It now has a 40-watt light bulb on a timer in there, to keep them laying through the winter. Apparently the shorter days signal hens to slow down their egg laying (or in some cases, stop altogether); when the light comes on early in the morning, they don't realize the days are getting shorter so they keep on laying. Right now we have the timer set so that the light is on automatically from 5:30-7:30 am. 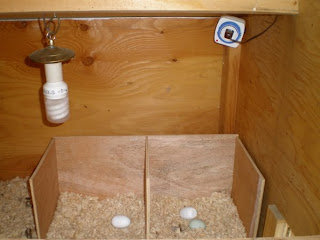 Note the little wooden eggs in the nest boxes (along with one of Lucy's own). Lucy and Doris were digging holes and laying eggs all over everywhere until we put those eggs in the boxes. Immediately they cottoned on to what the boxes were for, and they haven't laid anywhere else since. Supposedly the fake eggs may also stimulate Jane and Lana to start laying; they're still freeloading for now, though Jane is starting to look like she might give us an egg soon.

Keith also designed the run with a large door so that we can get in there if necessary. This is also how we let the chickens out to free-range when we're in the backyard to watch them. The top part of the door gets pretty dirty, so I painted it black; I did this on the ridges around the front doors too, for the same reason. The ladder inside might look homely, but it's how we get our sleep now! The hens go up to the coop in the early evening by themselves, and let themselves out in the morning. 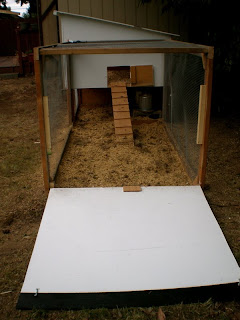 By the way, I know it looks really filthy in there. It isn't what you think. Before moving the coop and run into position, Keith dug a large hole and lined it with chicken wire, which he topped with loose dirt and then we put the coop and run on top. The underground chicken wire keeps predators from burrowing in. We topped the whole shebang with rice hulls, but the hens have turned up all the loose dirt underneath so it looks like we don't clean their space. Soon we're going to replace the rice hulls with hazelnut hulls or some other litter that isn't so messy. It's a pity we can't just lay sod in there - it would look so much nicer, but the girls would tear it up.

Anyway, here's what it looks like with the door closed. 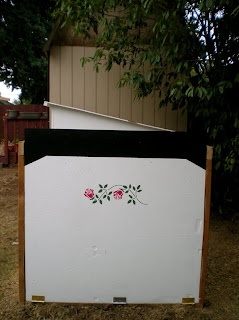 A back door lets us access the area underneath the coop where the feeder and waterer are. The feeder hangs from the underside, keeping it elevated so they don't kick (as much) litter into it; the waterer was too heavy for that, so it sits on a cement block. Also note in this picture how the electrical wire comes up from the ground; it actually runs from the back of the house, but you can't see it because Keith buried it. It winds from the house, along the deck, along the shed, and around the back of the coop, only to emerge neatly and discreetly where needed. Clever work! 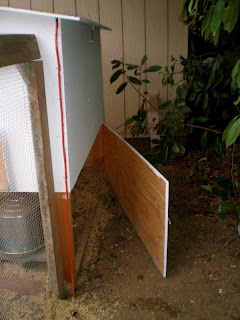 The roof opens up too, so that we can easily reach in for eggs, change the timer, etc. Originally this roof leaked like crazy in the rain, because there wasn't anything to cover the seam between the stationary and the moving part. We had a tarp over it for the summer, but that made it difficult to open the roof. So Keith got the idea to fit a piece of flexible vinyl over it and caulk that down. He also put a nice sturdy lip on the front of the roof so that rain would drip straight down and not run down the roof into the coop. 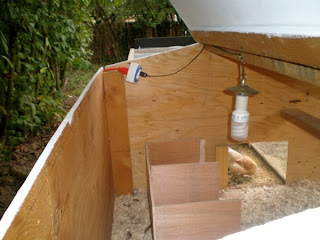 So that's our new pimped-out chicken coop. I did some of the work and it definitely took a little time, but I think big props need to go out to Keith for his hard work and ingenuity here. He pulled this off with scrap lumber and no construction experience, and saw solutions where I never would have. So kudos! The hens are already showing their appreciation. And now that it's all done (just in time for the rainy season!) and we can sleep in, relax in the morning, or go to dinner without having to be home at dusk, keeping chickens is even more fun. Now all we have to do is toss them our kitchen scraps and check their water every couple of days, and collect those tasty eggs!
Posted by Kimberly at 5:29 PM