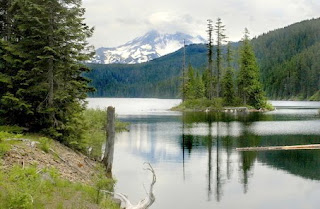 Here in Portland, we have the most delicious tap water in the country (and yes, I know Memphis makes a similar claim but when I go home to visit, that stuff tastes like pool water from all the chlorine). It's been proven in study after study to be the cleanest metropolitan water in the USA. This delicious, clean water comes from an open reservoir (see pic) located in a wilderness area with no humans, no cattle, and hence no threat of harmful contamination. The sun's natural UV radiation kills dangerous bacteria, and good minerals flourish in this environment. This system has worked since the reservoir was built in the mid-1800's and continues to work well today.

Enter the government, and its corporate backers.

Now the EPA, at the urging of a multinational corporation called Montgomery Watson Harza Global, Inc., has decreed that our water be buried, filtered, and chemically processed, at a cost of several hundred million dollars. You can read all the background here, but the long and short of it is that we stand to pay three or four times the price for inferior, potentially dangerous water. This isn't a sexy issue like abortion or health insurance so it's not making the news, which means it has quietly built up a momentum that is going to be difficult to stop now. Moreover, the proposed water changes seriously threaten Portland's world-famous independent brewing industry, as you can't make good beer without good water (excellent explanation here).

Coincidentally, when this came to my attention I was in the middle of reading an excellent book with the beautiful title Everything I Want To Do Is Illegal. Written by Joel Salatin, a true prophet of the modern age, this book is not only about farming; it's an indictment of big-government interference and the way it destroys innovation. Call me a conspiracy nut if you will, but we live in a day and age where the rules of commerce have been arranged to favor the large multinationals at the expense of smaller independents. Newcomers can't even get started in many industries, and smaller businesses are pushed out of existence by complex regulations.

In no area is this as problematic as it is with food and water. Our most basic needs are now threatened by an Orwellian "food safety" system that poses an unprecedented risk to actual food safety. Why take the cleanest water in the country and destroy it in the name of safety? Why prosecute Amish farmers under a system supposedly meant to protect consumers from diseases that proliferate in the corporate system, not on independent family farms? Meat and produce from independent farms has been demonstrated time and time again to be cleaner, more nutritious, and safer than anything from the corporate system (to say nothing of its superior flavor). Grass-fed beef has ZERO E. coli in its system; in fact, you can even destroy E. coli in a corn-fed cow by switching her to a grass diet for a mere two weeks before slaughter. But changes like this aren't required or even mentioned by government agencies, because they would cost Con-Agra too much money.

So children die, and innocent vegetables like green onions and spinach wind up contaminated by animal diseases somewhere in their journey through the factory food system. Why does the FDA/USDA respond to what is clearly a corporate-food threat by working harder to make us more dependent on corporate food? And why does the EPA respond to a clean, healthy water system with a mandate to destroy it?

Ronald Reagan (himself a questionable friend to the little guy) once said, "The nine most terrifying words in the English language are, 'I'm from the government and I'm here to help.'" We're hearing those words all too often now, and all of us should indeed be terrified.
Posted by Kimberly at 8:51 AM