It's Thyme for Gorgonzola Latkes! 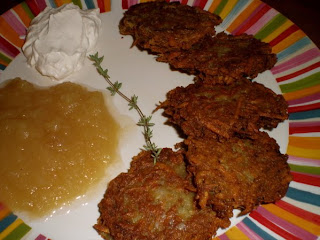 It's starting to feel, not just like December, but like the holiday season. It's the doing nice things for people and getting them back in return, accompanied by good food and wintry weather. Like today, for example.

Last night was the last night of Chanukah, so I had a couple of friends over for latkes. I had sweet potato latkes spiced with cumin, served with homemade applesauce and sour cream, with a spinach-tangerine salad on the side. We sipped amazing pear martinis and enjoyed warm, fresh-baked cranberry-apple pie with a ginger hazelnut crumble topping - a la mode, of course!

It was a lovely evening, and I baked an extra pie for the guy at the coffee shop, who's been a huge help as I sit there for hours every other day working on my business plan for my startup. This morning, I got an idea for gorgonzola latkes with fresh thyme, and I remembered him saying how much he liked latkes, so I whipped up a batch of the new recipe and plated them up with applesauce and sour cream. Miraculously, the latkes remained reasonably crisp and the pie held up as I walked the whole spread up to the coffee shop, where I was greeted with an enthusiastically appreciative reception and an enormous peppermint mocha.

Of course I ate a few of the gorgonzola-thyme latkes myself, and they're MIGHTY tasty. They might be my favorite latke recipe from now on. Try it yourself and see what you think - it doesn't have to be Chanukah for you to enjoy the miracle of oil!

Peel the potatoes, dropping each one into a bowl of water as you finish peeling it to keep it from discoloring. Pat the potatoes dry and grate them with the coarse side of a box grater, or run them through the food processor - you want them very coarsely grated, not minced. Working quickly, pile the grated potatoes into a colander lined with a towel, and squeeze repeatedly until you get as much moisture out of the potatoes as you possibly can.

Transfer the dry grated potatoes to a large bowl, and grate in the onion. Stir in the gorgonzola, egg, and thyme leaves.

In a separate bowl, combine the matzo meal (which is MUCH better for this than flour), salt, garlic powder, paprika, baking soda, and pepper. Whisk so it's evenly blended, then add it to the potato mixture and mix well. Set aside so the matzo meal can soak up the remaining liquid while you heat the fry oil; turn the oven on to about 250 F.

Pour the oil into a heavy skillet, so the bottom is covered by a quarter-inch or so. Heat over high heat until a small piece of potato sizzles vigorously when you drop it in. Scoop up the latke mix between a spoon and your palm, about two tablespoons' worth, and roll it into a rough ball shape so it holds together; drop that into the oil and flatten it with the back of your spoon. (Make sure the middle is quite flat so the inside cooks through.) Fry for a few minutes until the sides start to look golden-brown, then flip to cook the other side, and drain on a plate lined with paper towels. Depending on the size of your skillet, you should be able to do 2-3 latkes at a time.

As you work, pop the drained latkes into a dish in the oven so they stay warm and crisp until you're ready to serve with sour cream and applesauce. A fruity saiad with a vinaigrette complements the latkes very nicely!